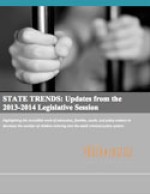 This report takes a look at states that have, and are taking steps to remove children from the adult criminal justice system.

State Trends documents the continuation of four trends in justice reform efforts across the country to roll back transfer laws in the country, from arrest through sentencing. Building on efforts from the last decade, states continue to amend and eliminate harmful statutes and policies created in the 1990s that placed tens of thousands of youth in the adult criminal justice system. In 2014, advocacy, research, operative Prison Rape Elimination Act (PREA) regulations, and fiscal analysis assisted in the introduction of bills in nine states to remove youth from the adult criminal justice system and give youth an opportunity at more rehabilitative services.

"Reform efforts strengthened tremendously during the 2013-2014 legislative sessions with nine states--Maryland, Missouri, Nevada, New York, New Hampshire, Ohio, Nebraska, West Virginia, and Hawaii, changing statutes and examining policies to allow more youth to stay in the juvenile justice system," said Marcy Mistrett, CEO of CFYJ. "The trend is continuing and the message is resonating across the country that kids need to be treated like kids."

Since CFYJ's inception, over half of the states have enacted legislation that echo what public polls, brain science, and even the Supreme Court have recognized: kids are different.

"Youth who commit offenses have a better chance of rehabilitation, and in most cases, are better served in the juvenile justice system rather than the adult criminal justice system," said Carmen Daugherty, CFYJ Policy Director and author of the report. "The state victories reported are a testament to families, advocates, and youth demanding more from their policy makers, and policy makers demanding more accountability from the state courts and agencies responsible for handling youth justice issues."

Jailing Juveniles: The Dangers of Incarcerating Youth in Adult Jails in America 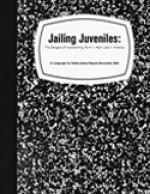 A November 2007 report from the Campaign for Youth Justice, “Jailing Juveniles: The Dangers of Incarcerating Youth in Adult Jails in America,” provides a summary of the risks that youth face when incarcerated in adult jails and a review of the limited federal and state laws protecting them. Every day in America, an average of 7,500 youth are incarcerated in adult jails. The Juvenile Justice and Delinquency Prevention Act (JJDPA) has protected children in the justice system for more than three decades. Under the “Jail Removal” core protection, youth cannot be detained in adult jails except in limited exceptions and in those narrow circumstances the “Sight and Sound Separation” core protection prohibits contact with adults. However these protections do not apply to youth being tried in the adult criminal system.

The report “Jailing Juveniles” shows how difficult is it to keep children safe in adult jails. They have the highest suicide rates of all inmates in jails, as they are 36 times more likely to commit suicide in an adult jail than in a juvenile detention facility. Youth in adult jails are also at great risk of physical and sexual assault, as 21% and 13% of all substantiated victims of inmate-on-inmate sexual violence in jails in 2005 and 2006 respectively, were youth under the age of 18 (surprisingly high since only 1% of jail inmates are juveniles). Congress could easily fix this problem by extending the protections of the Juvenile Justice & Delinquency Prevention Act (JJDPA) that disallow the placement of children in adult jails to protect all children, no matter what court they are in – juvenile or adult.

Too Many Youth Caught in the Net of Adult Prosecution

Too Many Youth Caught in the Net of Adult Prosecution 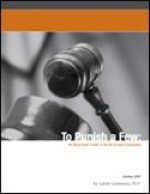 In October 2007, the Campaign for Youth Justice released “To Punish a Few: Too Many Youth Caught in the Net of Adult Prosecution,” which provides a comprehensive analysis of the issue of youth tried as adults. Jolanta Juszkiewicz, Ph.D., authored this comprehensive report as a follow up to her earlier study, “Youth Crime/Adult Time: Is Justice Served?”. This report uses data collected for the Juvenile Defendants in Criminal Courts, Survey of 40 Counties, 1998 (JDCC) program sponsored by the Bureau of Justice Statistics, U.S. Department of Justice. The JDCC was the most ambitious effort to capture information on the prosecution of juveniles as adults. This report presents a multi-faceted analysis to explore whether the intended purposes of the expansion of adult prosecution of youth were met in 1998 and whether the answers to that question would differ today.

The findings of this report add credence to those of innumerable other studies that (1) African-American youth were disproportionately caught in the net of adult prosecution and adjudication in most of the jurisdictions, when measured against their proportion of the general or arrested population and (2) a high proportion of youth were held in adult jails, and for many whose cases did not result in a conviction in adult court this was their only exposure to an adult facility. Other findings indicated that the filing mechanisms, particularly the statutory exclusion and to a lesser extent direct filing, were less successful in identifying those youth who were deemed to be inappropriate for juvenile court then the judicial waiver. Many youth whose cases were filed in adult court by these mechanisms were subjected to detention in adult jail only to have their cases be transferred back to the juvenile court system or otherwise thrown out of the adult system.

To Punish A Few: Too Many Youth Caught in the Net of Adult Prosecution

The Consequences Aren’t Minor: The Impact of Trying Youth as Adults and Strategies for Reform

This March 2007 study examines the laws and data in seven key states: California, Connecticut, Florida, Illinois, North Carolina, Virginia, and Wisconsin. An estimated 200,000 youth end up in the adult system each year, and 40 states allow or require the jailing of these youth in adult facilities before they ever go to trial. They are often held in adult jails for months or years, even though they are charged with nonviolent offenses. Research indicates that sending youth to the adult criminal justice system doesn't work to reduce crime. Jails are not designed to safely hold youth, who are either incarcerated in cells with adults, or separated in forms of isolation that can lead to depression or even suicide.

The laws are not evenly applied, with youth of color and those without access to adequate legal counsel more likely to end up in adult correctional facilities. Nationwide, three out of four young people admitted to adult prison in 2002 were youth of color. The report also notes that juvenile judges are frequently excluded from the decision to prosecute youth as adults. Instead, prosecutors and state laws determine which youth end up in the adult system, no matter how minor the offense.

The report urges policy makers to take advantage of the shift in public opinion and the new adolescent brain development research that inspired the Supreme Court to end the death penalty for minors. The report calls for a ban on the incarceration of youth in adult jails or prisons, and in the rare cases where the seriousness of a crime warrants consideration of prosecution in the adult system, a juvenile court judge should make the decision rather than prosecutors or state law.