Transforming the Justice System by Partnering with Families Released

FAMILY Comes First: A Workbook to Transform the Justice System by Partnering with Families, is the the first comprehensive analysis of current family engagement and family partnership practices in juvenile justice systems across the country and provides practical tools and resources for juvenile justice system practitioners invested in undertaking a family-driven approach to juvenile justice. We know that the ability of family members to meaningfully participate in their children’s lives makes a dramatic difference on youth outcomes. FAMILY Comes First provides a framework—The FAMILY Model—to guide efforts to create and sustain meaningful family-system partnerships.Through literature review, family focus groups and system practitioner surveys, we learned that system stakeholders are working together with families to break down stereotypes and stigma, engage families in individual treatment decisions and larger policy reforms, and prepare youth for productive futures. In the past few years, the juvenile justice field has made major strides in elevating the importance of family involvement to overall system reform efforts. We have come a long way even though we have far to go. FAMILY Comes First fills that gap by providing a clear and intentional guide to transforming the justice system by taking a family-driven approach.

Reforming DC’s Use of Adult Incarceration Against Youth 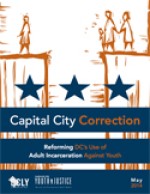 This report highlights the inadequate facilities, high risk of victimization, use of solitary confinement, long-term consequences of adult felony convictions, and failure to deter future crime as reasons to reform DC's approach to the prosecution of youth as adults by promoting the rehabilitation of young offenders and improving public safety. 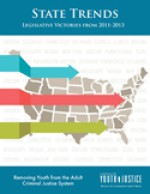 State Trends Legislative Victories from 2011-2013 Removing Youth from the Adult Criminal Justice System, takes a look at states that have, and are taking steps to remove children from the adult criminal justice system. Over the past eight years,twenty three states have enacted forty pieces of legislation to reduce the prosecution of youth in adult criminal courts and end the placement of youth in adult jails and prisons. The report documents the continuation of four trends in justice reform efforts across the country and highlights the key pieces of legislation enacted between 2011 and 2013. 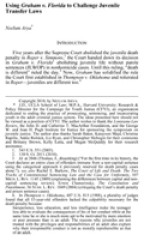 In October, 2011, CFYJ released Using Graham v. Florida to Challenge Juvenile Transfer Laws, authored by Neelum Arya, Research and Policy Director at the Campaign for Youth Justice. The article suggests that the recent Supreme Court opinion in Graham v. Florida abolishing life without parole sentences for juveniles (JLWOP) convicted of nonhomicide crimes, may be used to challenge juvenile transfer laws. Part I provides a description and analysis of the Graham opinion and reviews the Court's Eighth Amendment jurisprudence through to their recent ruling declaring JLWOP sentences for nonhomicide crimes unconstitutional. In Part II, Arya argues that youth have a right to rehabilitation found under the state's police power. In addition, Graham discusses three types of difficulties that adult decisionmakers in the criminal justice system have with respect to youth that may be useful to challenge transfer laws. First, judges and experts have problems evaluating the culpability and maturity of youth. Second, adult perceptions of youth are biased by the severity and manner in which the crimes were conducted. Third, counsel have difficulty representing youth in the adult system. Arya suggests these factors apply to all youth prosecuted in the adult criminal system, regardless of offense charged or sentence imposed. Finally, in Part III, Arya encourages lawyers to revisit these prior challenges in both individual cases and as part of impact litigation strategies to declare all transfer statutes, or portions of them, unconstitutional.

In April, 2011, CFYJ released State Trends: Legislative Changes from 2005 to 2010 Removing Youth from the Adult Criminal Justice System, authored by Neelum Arya, Research and Policy Director, which provides state policymakers, the media, the public, and advocates with the latest information about youth in the adult justice system. The first half of the report explains the dangers to youth, public safety, and the overall prosperity of our economy and future generations. The second half of the report examines 27 positive pieces of legislation enacted in 15 states during the last 5 years, as well as highlights active reform efforts underway in four categories:

This report arrives at a moment when there is a real opportunity for reform. States are recognizing that youth have developmental differences from adults as well as a great potential for rehabilitation, both of which should be taken into account in sentencing.