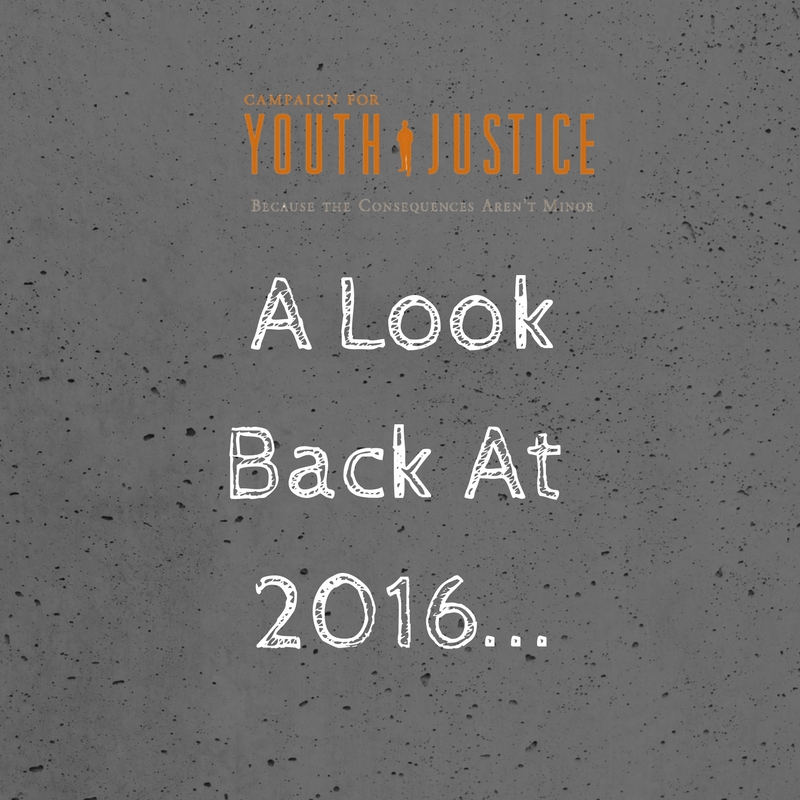 2016 was in many ways – let’s face it – a wretched year. But for the work to protect youth from the horrors of the adult criminal justice system, 2016 was actually a pretty good year.

The states of South Carolina and Louisiana passed laws to raise the age of adult court jurisdiction to 18. The states of Vermont and California both ended the practice of allowing prosecutors, without judicial review, to “direct file” juveniles into adult court.

As the year 2016 moves towards its half-way point, one trend has been unmistakable: states are moving to keep more youth out of the adult criminal justice system. And it’s not a regional but a national phenomenon. Led by South Carolina, which is poised to “Raise the Age” of adult court jurisdiction from 17 to 18 – bills have passed both chambers and only minor reconciling of bill language remains – states are adopting a variety of policies designed to treat youth as youth.

Michigan and Louisiana have both seen “Raise the Age” bills pass in one of their legislative chambers – Michigan in the House, Louisiana in the Senate – and in both cases the prospect of the bills ultimately becoming law this year is good. In New York and Louisiana, the governors have vocally backed the “Raise the Age” efforts. In fact, eight of the 9 remaining states that have ages of criminal court jurisdiction lower than 18 have introduced legislation to “Raise the Age” over the past 2 legislative sessions.

But current reform efforts aren’t limited to “Raise the Age”. In Louisiana, Michigan, New York and Missouri, proposed reforms go beyond “Raise the Age” to include larger efforts to change the ways youth are treated by the criminal justice system.

In Alabama and Missouri, proposals to remove pre-trial youth from adult jails have made serious progress. Alabama’s bill passed in the Senate but fell short of the finish line when their session ended on May 6, while Missouri’s bill looks very likely to become law. Similar legislation has been proposed in Washington, D.C., as part of an omnibus youth justice package.

Indiana has passed a law allowing some youth sent to adult court to access to a “reverse transfer” process that could send them back into the juvenile system, and in Vermont the power of prosecutors to “Direct File” youth into adult court has been drastically curtailed.

In Florida, where such prosecutorial discretion is used more than in any other state, a bill to curb “Direct File” passed unanimously out of two Senate committees before running out of time at the end of that state’s short 60-day session. Another attempt to reform the use of “Direct File” by prosecutors is underway in California, where a governor-supported ballot initiative on the issue may go before voters in November.

While there are still too many mechanisms for transferring youth into the adult system, it is clear that the states have come to recognize how harmful and counter-productive such transfers are. The results of this year will be better justice for more youth, with powerful positive momentum and strong prospects for even greater gains in the coming years.

Reforming Florida’s direct file system will improve public safety outcomes and help sustainably balance the budget, according to a new policy brief entitled “No Place for A Child.” Prosecutors in Florida transfer more youth to the adult criminal justice system, without any checks or balances, than in any other state in the country.

The new research came out the same morning the Florida senate moved forward on direct file reform legislation. On Thursday, Senate Bill 314 earned a second unanimous vote of support from the Florida Senate Appropriations Subcommittee on Criminal and Civil Justice. The Republican subcommittee chairman thanked the researchers for their work after hearing from Floridian judges and advocates who support the bill.

The authors of the brief, researchers from the free market–oriented James Madison Institute and the Florida State University Project on Accountable Justice, gathered FY2010 data from the Florida Department of Juvenile Justice (DJJ) and Department of Corrections (DOC) to provide unique insights into the fiscal and social impact of reining in direct file. Their research complements a recent website with specific stories of direct-file Florida youth.

Direct file – a unilateral transfer performed by prosecutors before any hearing or due process can occur – accounts for 98% of the state’s cases of minors in the adult system, which remarkably totaled more than 10,000 cases in the past five years. Ending or reforming the practice of direct file would allow youths’ cases to be more fairly considered by a judge for transfer, and would greatly reduce the total number of transferred youth in the state.

This decrease of youth in the adult system would move more children back to a system that focuses on rehabilitation, which is especially appropriate because both DOC and DJJ data suggest that direct-filed youth would pose a low risk in the juvenile justice system. In fact, the researchers use government risk assessment tools and find that if direct-filed youth were processed in the juvenile justice system, fully 87% would not be placed in secure detention.

Moreover, the policy brief finds that keeping direct file–eligible youth in the age-appropriate juvenile justice system would save the state $12.6 million in ten years, with annual savings accumulating annually just four years after the reform. The authors point out that placing youth in the adult system demonstrably harms rehabilitation; in their words, “the adult system sets children up to fail.” Nonetheless, another decade of the status quo would cost Floridian taxpayers more than $175 million dollars.

Without access to the rehabilitative services offered by the juvenile system, the authors note, youth have no developmentally-appropriate guidance to reform their behavior. Poor outcomes with adult-system probation reflects near-certain causative evidence that placing children in the adult system significantly raises transferred youths’ recidivism rates.

The researchers call for reform of direct file after concluding that the practice negatively affects public safety, children’s mental health and potential to reform, and the state’s budget. Finding a way to offer more due process and rehabilitative opportunities for children, they say, will be “unambiguously positive” for the state, its government, and its young adults.

A direct link to the research is available here.

You can read more about the lives affected by direct file practices in Florida by visiting www.noplaceforachild.com. 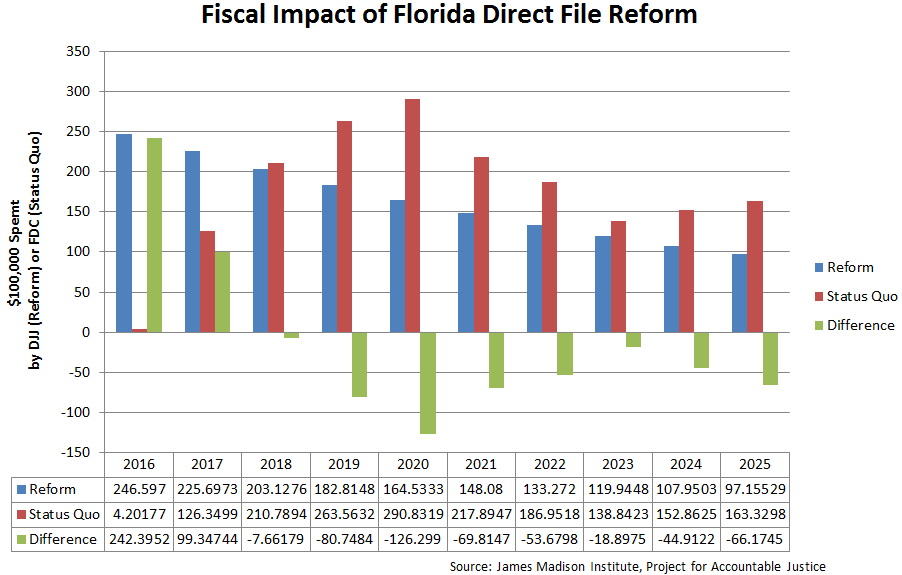 The Detriments of Direct File

Direct File occurs when a state has given the prosecutor power to file charges against a juvenile directly in adult criminal court. When a prosecutor exercises their discretion by choosing to file directly to adult criminal court they effectively override any juvenile or family court jurisdiction over a case. Direct file allows the prosecutor to hold all of the power in determining where to bring charges and what type of sentence a youth may receive if convicted.

Allowing the prosecutor to direct file is problematic because many prosecutors want to go for the most severe punishment and do not fully take into account important considerations for unique to each youth in the same way that a judge who could allow a transfer would consider.This lack of individual consideration is exacerbated by, “…wide variation among the States regarding criteria for direct file treatment, with some emphasizing offense categories, others the age of the juvenile involved, and still others the extent and seriousness of the juvenile’s offending history.”

Some states that previously had a direct file systems chose to discontinue the practice because, “not only does direct file omit a disinterested arbiter for the child’s best interests, it plunges youngsters — and increasingly those charged with nonviolent crimes — into the much more punitive adult system.”
Additionally, it has been found that direct file has had little effect on violent juvenile crime. If these direct file capabilities of the prosecutor fail to affect juvenile crime then why are they needed in the first place?

Currently, 16 states still allow direct file while the rest of the country has moved away from the practice. The states that continue to allow prosecutors to direct file youth into adult court are: CA, MI, DC, FL, LA, GA, PA, MT, NE, OK, VT, WY, VA, AZ, AK, CO. Of the state that currently allow direct transfer both California and Florida lawmakers are considering a move towards a more equitable juvenile justice system by ending direct file. California has made progress towards creating a more just juvenile justice system over the last few years, but moving away from direct file ability will ensure that judges, not prosecutors are making transfer decisions for youth after a consideration of several different factors. In 2014, 393 juveniles were transferred to adult court in California and 1607 juveniles were transferred to adult court in Florida. These numbers include both judicial waiver and prosecutorial direct file but. A recent study from Human Rights Watch found at 98 percent of the juveniles who end up in adult court are there do to “direct file” of a prosecutor.This means that over 1500 children in one year alone would benefit from direct file reform in Florida.

According to the Office of Juvenile Justice and Delinquency Prevention’s latest bulletin, U.S. courts with juvenile jurisdiction handled nearly 1.4 million delinquency cases in 2010. “Delinquency Cases Waived to Criminal Court, 2010” shows that more than half (54%) of these cases were handled formally (i.e., a petition was filed requesting an adjudication or waiver hearing) and of the petitioned delinquency caseload, about 1% resulted in judicial waiver to adult criminal court. The number of delinquency cases judicially waived peaked in 1994 at 13,300 cases, more than double the number of cases waived in 1985. In 2010, juvenile courts waived an estimated 6,000 delinquency cases, 55% fewer cases than in 1994.

In a recent report titled “Branded for Life,” the Human Rights Watch condemned the state of Florida’s outdated policies of allowing juveniles to be moved to the adult court through “direct file.” This policy allows a prosecutor to have unfettered discretion to move any juvenile offender under 18 into the adult court. “Florida transfers more children out of the juvenile system and into adult court than any other state. In the last five years alone, more than 12,000 juvenile crime suspects in Florida were transferred to the adult court system.” Roughly 98% of Florida youth in adult courts are there because of the arbitrary decisions of prosecutors stemming from this “direct file” process.