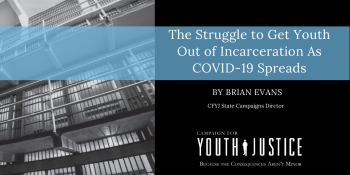 COVID-19 appears to be moving into prisons, jails, and detention centers more quickly than the criminal legal system can (or will) respond. While most of those incarcerated are adults, there are thousands of children at risk in these dangerous facilities. The obvious solution – let as many children out as possible while ensuring they have a safe place to go – has not been so simple to implement, as different branches of government (judges, governors, mayors, prosecutors, etc.) need to make decisions to allow children to be released from court-ordered confinement. Meanwhile, the clock is ticking.

As of April 2, children and/or staff in at least 16 juvenile correctional facilities have tested positive for COVID-19; on April 1, a correctional officer in the Washington, DC, Department of Youth Rehabilitation Services (DYRS) died of the virus. Several children in immigrant detention in New York have also tested positive. The slow pace of the response has led to a spate of legal action, including in New York City, where the outbreak is currently most severe, and against ICE and the Office of Refugee Resettlement. The lack of urgency in the latter case, with the judge delaying a ruling for over 10 days, illustrates the rising level of frustration for those concerned about the rapid spread of the disease in locked facilities.

The situation is dire enough that law enforcement unions have joined the call for more aggressive action, for example, in the call of the immigration judges’ union to close immigration courts, or, most recently, in the decision of the Washington, DC, Fraternal Order of Police (FOP) to support an ACLU-led lawsuit against the DC Department of Corrections.

Youth justice advocates have in many places taken the lead in pushing for release of prisoners.

Advocates in 30 states have sent letters to their governors demanding action, and some governors have taken good steps. Michigan Governor Gretchen Whitmer issued an executive order encouraging, among other things, “Eliminating any form of juvenile detention or residential facility placement for juveniles unless a determination is made that a juvenile is a substantial and immediate safety risk to others.” California Governor Gavin Newsom issued an order on March 24 to “suspend intake into Division of Juvenile Justice (DJJ) facilities for 30 days.”

But the most common action so far has been to end family visits, which will help prevent the spread of the virus out of facilities, but won’t help stop its spread within them.

Children are getting out, thanks to the efforts of local agencies and advocates. For example, on March 30, The Appeal reported some good results in Milwaukee. According to Mark Mertens, administrator for Milwaukee’s Division of Youth and Family Services: “We were able to get emergency hearings to look at releases and get some kids out quickly, safely, with other alternatives.”

Maryland closed one facility, to repurpose as a potential quarantine center, that only had 5 children in it. Vermont has closed its last youth prison, now used as a treatment center for COVID-19 patients with mental health needs. New York City’s two juvenile detention facilities are more than half empty.

Juvenile detention was generally speaking not close to full before the crisis began, and with school closures and the consequent drop in arrests (the school-to-prison pipeline is real), we are seeing a further emptying.

But it is not happening quickly enough.

Large scale releases of youth from incarceration need to happen, with adequate supports in the community, and they need to happen now, if the spread of the disease is to be slowed.

Once this crisis is over, hopefully it will finally sink in that we have been over-arresting and over-incarcerating young people (and adults). Few arrests, lots of releases, and empty or – preferably – closed facilities should certainly be the rule now, and should become the new normal.