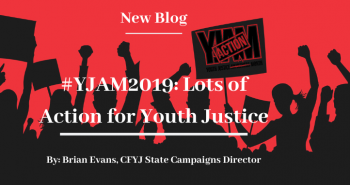 During Youth Justice Action Month (YJAM) this October, groups, organizations, and individuals across the country engaged in discussions about youth justice, and about the racism inherent in the youth and criminal justice systems.

We are happy to report that YJAM was a great success!

The month opened on October 1 as New York officially implemented its “Raise the Age” law, as 17-year-olds on that day moved from adult to juvenile court jurisdiction. As the month closes, the Governor of Michigan has just signed a package of bills that “Raise the Age” in her state.

During YJAM, many of the events and activities were centered around directly impacted people:

The conversation during YJAM was further amplified by podcasts, Tweet chats, and webinars. Each Monday on our blog, guest bloggers highlighted the theme of A.C.T. (Awaken, Confront, Transform) to End Racism:

Thank you all so much for your participation in YJAM this year, as it continues to grow  and advocates and activists continue to find bigger and better ways to use the month to accelerate their reform efforts.

We couldn’t do it without YOU!