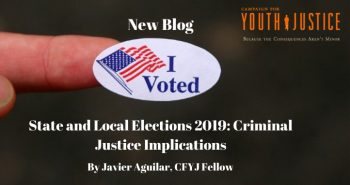 On November 5, 2019,  the United States held numerous state and local elections throughout the country, encompassing a variety of governor and prosecutor positions. According to the political report, The Appeal, approximately 500 prosecutors and sheriffs will be elected in 2019, which will be instrumental in shaping criminal justice reforms. On Tuesday night, Americans in several states had the chance to support candidates that have proposed policy initiatives that will mitigate the racial disparities within the criminal justice system by reducing the high volume of felony convictions and supporting voting rights for citizens returning from felony convictions.

Andy Beshear (D) appears to have defeated incumbent Gov. Matt Bevin (R) in Kentucky by a narrow margin, with approximately a 5,000 vote lead. Kentucky is notorious for its disenfranchisement of people with criminal records. Based on the Sentencing Project’s 2016 estimates, the criminal justice system disproportionately affects historically disadvantaged groups, primarily the African-American population; in Kentucky, 26.2% of the total African-American population is barred from voting. During the campaign, the new governor-elect promised to sign an executive order to restore the right to vote to anyone who has completed a sentence after a nonviolent felony conviction, which could cover more than 100,000 people.

A historic moment took place in Virginia with the Democratic party taking control of both the state House and the Senate for the first time in more than two decades. At the local level, specifically in Fairfax, Arlington, Prince William, and Loudoun counties, prosecutors who pledged to champions criminal justice reform. The newly-elect prosecutor in Fairfax County, Steve Descano, focused his campaign on criminal justice reform by advocating to “drop prosecutions for marijuana possession, charge fewer felonies, discontinue use of the death penalty and end cash bond.”

San Francisco held the first open District Attorney (DA) race in over a hundred years and it remains too-close-to-call. As reported by the city’s precincts, the difference in votes between the top two candidates, as of Wednesday afternoon, is a mere 2,205 votes in a ranked-choice voting system with the interim DA, Suzy Loftus, leading Chesa Boudin. (Boudin, however, had over 1,000 more first-choice votes.)

While both candidates focused their campaign to address issues such as excessive force and police brutality, ending mass incarceration, address the racial disparities that continue to be paramount in the criminal justice system, their ideologies and backgrounds differ, with Boudin, a public defender, identifying as progressive, while Loftus has a background in prosecution and law enforcement and is seen as a more establishment candidate. Now, only time will tell who won the race and it will be interesting to see how the newly-elected DA will enact their criminal justice policies in San Francisco.

Criminal and youth justice reform has gained traction as a salient topic in the presidential debates and in the plans many of the candidates have unveiled, raising awareness and support for the issue. But state and local level elections are where the people who will actually implement reforms are chosen. By ascending to local and state positions, reform-minded advocates can influence the lives of millions of Americans. The progress they make will set an example that can potentially have an influence on the national level.