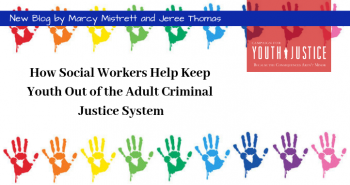 March is Social Work Month.  This month we thank and celebrate social workers across the country for the incredible impact they have on the most vulnerable youth and adults in our communities. The categorizes the following key action areas unique to social work:  promoting social change, problem solving in human relationships, and empowering and liberating all people. Given this, it is no surprise that social workers play a vital role in youth justice reform.

March is Social Work Month.  This month we thank and celebrate social workers across the country for the incredible impact they have on the most vulnerable youth and adults in our communities.

The International Federation of Social Work categorizes the following key action areas unique to social work:  promoting social change, problem solving in human relationships, and empowering and liberating all people. Given this, it is no surprise that social workers play a vital role in youth justice reform.  The establishment of a separate, juvenile court was anchored in social work principles.  Jane Addams, a social activist, was critical to establishing the first separate juvenile court in 1899 in Chicago.  Jane Addams and other members of the Hull House movement lived and worked in the communities they served. At a time where the population in Chicago had doubled within a decade with people from abroad, they noted that many children were being arrested, fined and incarcerated after being abandoned or orphaned by their families.  She believed children had a different level of need for adventure that should be nurtured, not criminalized, and that the city had a role in protecting and preserving family life. While Addams focused on listening to the needs of community, rather than trying to force communities to assimilate--she still believed that children needed to develop values and morals that were counter to urban living at the time. Often this meant providing basic needs (homes, food, medical care) while also creating opportunities for children to remain connected culturally to their communities through celebrations, traditions, and work.

Today, social workers serve as youth justice non-profit leaders, advocates, juvenile justice agency leaders, facility and community counselors, crisis responders, researchers, and direct support to youth in public defender offices.  In a 2013 journal article entitled “Increasing Alternative Sentencing in the Juvenile Justice System Through a Partnership Between Public Defenders and Social Workers” researchers found that youth who were assigned a social worker were nearly three times more likely to receive an alternative to detention than those without a social worker.  These outcomes are why the National Juvenile Defender Center recommends the inclusion of social workers on public defense teams to ensure holistic representation.  It is also why states like Colorado require social workers to be a part of juvenile public defense teams and why states like West Virginia (SB 581) and Maine (LD 683) are considering an expansion of the role of social workers in court to help reduce incarceration.

Social workers are also critical innovators of community interventions for youth and young adults who come into contact with the system.  For example, in Massachusetts is a trained social worker who developed a program that serves hundreds of young adults with system involvement through their .

Finally, social workers advocate for policies that keep youth out of the adult system.  In 2009, the National Association of Social Workers (NASW) issued the following policy statement:  NASW recommends that the processing and treatment of children and youths who enter the juvenile justice system be differentiated from the treatment of adults through every phase of contact, including prevention, early intervention, formal diversion, detention, probation, residential care, incarceration, and postrelease care.  As a result, NASW chapters in several states are active coalition partners supporting laws that get youth out of adult courts, jails, and prisons.  In South Carolina, Tracey Tucker, a former social worker at the Department of Juvenile Justice and the Richland County Public Defender’s Office, has built a diverse coalition of stakeholders, including the SC NASW chapter,  to ensure that the state fully implements its “Raise the Age” law to keep most 17-year-olds out of the adult system.  Social workers are critically positioned to confront the structural racism that persists in our justice system.

In states across the country, social workers are standing up in solidarity with communities that face over-incarceration, racism, and other disinvestments in communities to fight for justice reforms.  In 2018, CFYJ partnered with NASW to issue a social justice brief highlighting the adultification of black youth in the adult criminal justice system.

Whether testifying in state legislatures, supporting youth and families in their advocacy, or running programs on the ground, their perspective and training is critical to successful reforms.

This month and beyond, the Campaign for Youth Justice salutes the work of social workers across the country and looks forward to continued partnerships with social workers and social work associations to advocate for laws that keep youth out of the adult system and provide developmentally appropriate services for them.