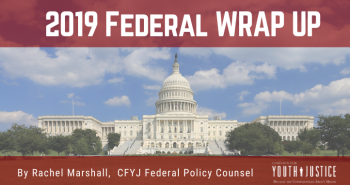 The start of 2019 was an exciting one for juvenile justice advocates – coming off the reauthorization of the of the Juvenile Justice and Delinquency Prevention Act (JJDPA), the possibilities for reform in the 116th Congress felt endless. As outlined in the National Juvenile Justice and Delinquency Prevention Coalition’s (NJJDPC) recommendations to the new Congress, we urged Congress to build on the momentum of the JJDPA reauthorization by embracing a positive vision for youth justice reform; ensuring developmentally appropriate responses to justice-involved youth; reducing reliance on detention and incarceration, instead investing in communities; ensuring fairness, equity, and safety for justice-involved youth; and helping youth successfully re-enter their communities.

As the first session of the 116th Congress comes to an end, let’s see whether Congress took up any of our recommendations:

The start of the new fiscal year began on October 1, 2019. This marked an important date for juvenile justice advocates, as it is the date that a majority of the changes made to the JJDPA by the Juvenile Justice Reform Act of 2018 (JJRA) took effect. However, Congress has yet to get a single appropriations bill for fiscal year 2020 (FY20) through the entire legislative process and to the President’s desk to be signed into law.

Since the JJDPA had last been reauthorized in 2002, funding for juvenile justice programs has decreased by nearly 50%. The JJRA authorized Congress to appropriate $176 million for titles II and V of the law, and we strongly advocated for the full amount to be appropriated for the new fiscal year.

The House passed its FY2020 Commerce, Justice, and Science (CJS) appropriations bill, the bill that contains funding for juvenile justice programs, back in June. The final funding levels for juvenile justice programs in the bill include $66 million for title II of the JJDPA, $64.5 million for title V, and $10 million for the Juvenile Accountability Block Grant (JABG) program (the first time this program has been funded since Fiscal Year 2014). While this is an increase from current funding levels, it is still $45.5 million below authorizing levels. The Senate passed its CJS appropriations bill at the end of October and included $63 million for title II and $40 million for title V, which also is a small increase from FY19 levels. The Senate bill did not fund the JABG program.

The government is currently being funded through a continuing resolution, which maintains funding levels from FY19. The continuing resolution runs out on December 20 and members of the House and Senate Appropriations Committees are currently working to hammer out the differences between the various funding bills. We have urged members to support the funding levels for juvenile justice programs in the House-passed bill.

Aside from funding, we have been working with members of Congress to introduce juvenile justice reform bills. Early in the year, we saw the introduction of several juvenile justice reform bills, including H.R. 2300, the Eliminating Debtor’s Prison for Kids Act of 2019, which would incentivize states to eliminate fines and fees for youth in the juvenile justice system. There was also a package of sentencing reform bills for youth introduced in the House that recognize that children are different from adults and should be treated as such, particularly in our criminal justice system. You can read more about those bills and others in our last federal update from August. Unfortunately, we have not seen any movement on those bills since their introduction, but we remain hopeful they will move in the new year.

In October, we were thrilled to see Rep. Tony Cardenas (D-CA), joined by Rep. David Trone (D-MD), and Sen. Kamala Harris (D-CA) introduce resolutions in their respective chambers declaring October to be “National Youth Justice Action Month.” Youth Justice Action Month, or YJAM, was inspired by Tracy McClard, a mother in Jackson, MO, whose son, Jonathan, died by suicide after being transferred to the adult criminal justice system and incarcerated in an adult facility. To honor Jonathan’s life, Tracy hosted a 5K race to bring public awareness to the issue of youth being transferred to the adult criminal justice system. Since that first race in 2008, youth justice advocates around the country have come together to organize events and online activities every October to raise awareness and inspire action on behalf of young people impacted by our criminal justice system.

Also in October, Rep. David Schweirkert (R-AZ) and Rep. Linda Sanchez (D-CA) introduced H.R. 4911, the Childhood Outcomes Need New Efficient Community Teams, or the CONNECT Act last week in the House. The bill provides grants to promote better coordination among juvenile justice systems and child welfare systems to address the needs to crossover youth. Estimates indicate that as many as 55 percent of children in the juvenile justice system have had previous contact with the child welfare system, which is why legislation like the CONNECT Act is so important. The bill was introduced earlier this spring in the Senate by Sen. Chuck Grassley (R-IA) and Sen. Gary Peters (D-MI) (S.1465).

We were also excited to see the introduction of H.R. 5053, the Justice for Juveniles Act. Led by Rep. Mary Gay Scanlon (D-PA) and Rep. Kelly Armstrong (R-ND), this bill would exempt youth up to the age of 21 from the requirements of the Prison Litigation Reform Act (PLRA). Under the PLRA, before an incarcerated individual can file a lawsuit in court, he or she must take the complaint through all levels of a prison’s or jail’s grievance system.  If a person fails to comply with these requirements, including missing a filing deadline that can be as short as a few days, he or she may no longer be able bring a lawsuit. The PLRA makes it nearly impossible for incarcerated individuals to seek justice for the abuse they may suffer while incarcerated. This bill has strong bipartisan support, and the Chair of the House Judiciary Committee, Rep. Jerry Nadler (D-CA), recently signed on a co-sponsoring, signaling there is a good chance the bill will move forward.

Given the spate of school shootings in the last couple of years, school climate and school safety has been at the top of Congress’ mind. Unfortunately, Congress’ response has not been entirely helpful. In both the House and the Senate, there has been a push towards supporting threat assessment systems, which often disproportionately impact vulnerable youth.

One bill in particular, H.R. 838, the Threat Assessment, Prevention, and Safety Act of 2019 (TAPS Act), has gained traction and has 168 cosponsors, split evenly between Democrats and Republicans. This bill, which calls for the development of a national strategy to prevent targeted violence through behavioral threat assessment systems, would likely criminalize children, further harm marginalized communities, and interfere with proven and evidence-based efforts to build positive relationships in schools and climates conducive to learning and child wellbeing. CFYJ signed onto a letter opposing the bill and has been working with a coalition of advocates to educate members of Congress and their staff on the potential harms of threat assessment systems.

Despite negative legislation, several members have introduced legislation aimed towards creating safe and welcoming environments for students. In September, Sen. Bob Casey (D-PA), introduced S. 2548, the Safe Schools Improvement Act of 2019. Among other things, this bill encourages positive and preventative approaches to school discipline that minimize students’ removal from instruction and ensure that students are not subject to disproportionate punishment. Rep. Ayanna Pressley (D-MA) also introduced the Ending Punitive, Unfair, School-Based Harm that is Overt and Unresponsive to Trauma Act (Ending PUSHOUT Act). The Act would authorize $2.5 billion in new federal grants to support states and districts that commit to ban unfair and discriminatory school discipline practices and improve school climates. It also would codify Civil Rights Data Collection and strengthen the Department of Education’s Office of Civil Rights by investing $2.5 billion for additional enforcement and monitoring capacity. CFYJ has endorsed both of these bills.

What Else Happened at the Federal Level?

Beyond the halls of the Capitol, we have also been gearing up for the 2020 elections. In August, NJJDPC released a roadmap for transforming our justice system. The Future of Youth Justice 2020 lays out eight priority areas where the next administration can take action to increase public safety, achieve better outcomes for our children and families, and bring us closer to a legal system that is just and fair for all. The platform was shared with every 2020 presidential candidate and has been signed by over two dozen advocacy organizations.

While criminal justice reform has been embraced across the country and on both sides of the aisle, youth often get left out of those conversations. We are thrilled to see that, to date, seven of the 2020 presidential candidates have included juvenile justice in their overall justice reform platforms, six of whom released their platforms after NJJDPC released the Future of Youth Justice. All seven candidates have included getting youth out of the adult criminal justice system as one of their priorities.

At the Executive Branch level, we have not seen a whole lot of action from the Office of Juvenile Justice and Delinquency Prevention (OJJDP), the federal agency tasked with implementation of the JJDPA. As noted above, a majority of the amendments made to the JJDPA took effect at the beginning of the current fiscal year (FY 2020) on October 1, 2019; however, states have received very little guidance from OJJDP on what these changes mean in terms of compliance requirements. OJJDP did not provide any type of summary of the changes to the law until June 2019 when it released a 4-page summary of major changes to the law. They also have failed to release applications for FY 2020 Title II grants. While this partially could be due to the hold up in the appropriations process, states are still in need of guidance in order to be prepared to implement the many changes to the law.

This past year we have seen the introduction of a lot of incredible pieces of legislation that would make a huge impact in the lives of young people across the country. As we head into 2020, we hope to see this legislation move, and we look forward to identifying additional areas for reform. For example, we hope to see the re-introduction of a bill to phase out the JJDPA’s valid court order exception, which provides a work around to allow youth to be locked up for status offenses.

We will also continue to keep a close eye on the Department of Justice and OJJDP to ensure proper and full implementation of the JJRA, and put pressure on Congress to exercise its oversight authority to ensure OJJDP is being held accountable and doing its job as mandated by the JJDPA.

Stay tuned for updates in the New Year, and to get updates straight to your mailbox and learn how to get more involved, sign up for our weekly newsletter!