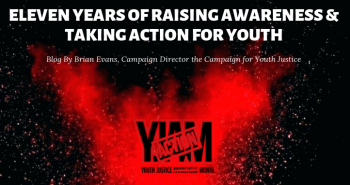 Tomorrow, on October 1, YJAM (Youth Justice Action Month) begins again. Since 2008, youth justice advocates around the country have come together to organize events and online activities to raise awareness and inspire action on behalf of young people impacted by our criminal justice system.

This year, we note that since CFYJ opened, more than 100 pieces of legislation have been passed that have reduced, restricted, or ended the trial, incarceration, or sentencing of children in adult courts. But we also note that racial and ethnic disparities inherent in the system have not improved – more clear evidence that racism remains a centerpiece of our justice system.

For example: “Black youth are approximately 14% of the total youth population, but 47.3% of the youth who are transferred to adult court by juvenile court judges who believe the youth cannot benefit from the services of their court.”

Because of this, the theme for YJAM this year is A.C.T. (Awaken, Confront, Transform) to End Racism, and throughout the month we will be focusing on the ways in which racism infects our youth justice system, and the ways that advocates and activists are fighting to change that.

We are promoting screenings and discussions of “When They See Us”, the award-winning Netflix series that so powerfully illustrates the injustices at the intersection of youth justice and racism. Many such screening events are already scheduled around the country.

During YJAM, we will also be promoting action on the issue of children incarcerated with adults. From Oct. 1-15, we will be urging state Governors to certify their state’s compliance with the Prison Rape Elimination Act (which requires all children under 18 to be at least sight and sound separated from adults). And on October 29, there will be a Day of Action to call on all jurisdictions to stop jailing children with adults.

There will also be plenty of action on social media and elsewhere online – guest blogs, tweet chats, and podcasts. It will be a busy month!

You can sign up today if you want to organize an event, or to receive regular updates on how you can participate.