Support of Michigan's Bill Package to Raise the Age 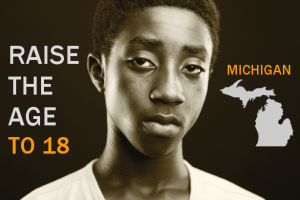 Dear Chairman Jones and Members of the Senate Judiciary Committee:

The Campaign for Youth Justice strongly supports HB 4947 through HB 4966.  This comprehensive bill package will protect youth by raising the age of juvenile court jurisdiction, funding developmentally-appropriate rehabilitative services, and prohibiting the placement of youth in adult facilities where they are vulnerable to physical, sexual, and emotional abuse.  We encourage all members of the Senate Judiciary Committee to vote in favor of these bills, so the full Senate may put Michigan one step closer to positive youth justice reform.

The Campaign for Youth Justice is a national non-profit that supports state efforts to reduce and eventually eliminate the need to prosecute, sentence, and incarcerate youth in the adult criminal justice system.   As a result, we have seen the powerful impact of policies that raise the age of juvenile court jurisdiction, limit the use of juvenile transfer to the adult court, remove youth from adult facilities, and ensure that youth in adult facilities are safe from physical, sexual, and mental abuse.   Since our founding 10 years ago, 30 states have passed legislation to reduce the prosecution, sentencing, and incarceration of youth in the adult system.

In 2016, South Carolina[1] and Louisiana,[2] passed laws to raise the age of juvenile court jurisdiction, bringing the total number of states with lower ages of juvenile court jurisdiction to 7.[3]  Without raise the age, removal of youth from adult jails and prisons, and age-appropriate rehabilitative programs, youth in Michigan will be at a significant disadvantage compared to their peers in 43 other states.They are at a greater risk while they are incarcerated.  They are at a serious disadvantage upon release, and their families and communities are no safer.

Youth who are incarcerated with adults are at a greater risk of physical and sexual abuse. According to research by the Bureau of Justice Statistics (BJS), of the youthful inmates aged 16 and 17 that reported sexual abuse, an estimated 78.6% reported experiencing physical force or threat of force and 65.5% reported being victimized more than once.[4]  The National Prison Rape Elimination Commission found that “more than any other group of incarcerated persons, youth incarcerated with adults are probably at the highest risk for sexual abuse.”[5] In addition, youth in adult facilities are also 36 times more likely to commit suicide than their peers in juvenile facilities.[6]  Michigan’s youth are currently at a greater risk of abuse and suicide than their peers in 43 other states, but you can change that.

Youth who are convicted as adults also experience significant and life-altering collateral consequences that stunt their ability to grow into self-sufficient, law-abiding adults.  The American Bar Association and the National Institute of Justice’s Collateral Consequences website identified over 700 “penalties, disabilities, or disadvantages” imposed as a result of an adult criminal conviction in Michigan, including ineligibility for certain vocational licenses, housing opportunities, and public offices.[7]  Without the ability to have a roof over a youth’s head and earn a living, Michigan’s youth are at a greater risk of homelessness, joblessness, and recidivism than their peers in 43 other states, but you can change that.

Finally, youth, their families, and communities are no safer when youth are tried, treated, and incarcerated with adults.  Youth prosecuted in the adult system are 34% more likely to recidivate and with more violent offenses than those youth prosecuted in the juvenile system.[8]   In addition, youth held in adult jails and prisons are more likely to commit suicide than adult inmates, and they have significantly more behavioral issues and rule violations.[9]  Since 95% of these youth will return to their communities by age 25[10], it is critical that they receive the behavioral, social, and mental health treatment that they need to become law-abiding citizens.  Extensive age-appropriate treatment and effective diversion programs are only available to youth in the juvenile system, and as a result, the success of youth and the safety of their communities are linked to treating youth in a system tailored to meet their needs.

In addition, with declining youth crime rates, many states like Connecticut and Illinois have found that after they raised the age of juvenile court jurisdiction, the flood of 17 year olds that they feared would overwhelm the juvenile system, did not show up.  In fact, quite the opposite occurred.  According to a September 2016 Connecticut report, since raising the age in 2009, the rate of incarceration has dropped 77% among 16 and 17 year olds, and 54% among 18 to 21 year olds.[11]  Similarly, the arrest rates of 16 and 17 year olds has declined by 64%, and by 52% for 18 to 21 year olds.  This decline in arrests and incarceration is related to states raising the age while also expanding the use of front-end diversion, improving probation and aftercare approaches, reducing pre-trial detention, addressing mental health needs outside of placing youth in deep-end facilities, increasing an emphasis on community-based approaches, improving how the juvenile justice system manages resources, and keeping youth safe from further trauma by complying with the Prison Rape Elimination Act’s Youthful Inmate Standard.

Michigan’s youth deserve the same opportunity as their peers in other states to mature into self-sufficient, law-abiding, contributing members of their communities, which is why it is critical that members of the Judiciary committee vote in support of HB 4947 through HB 4966.