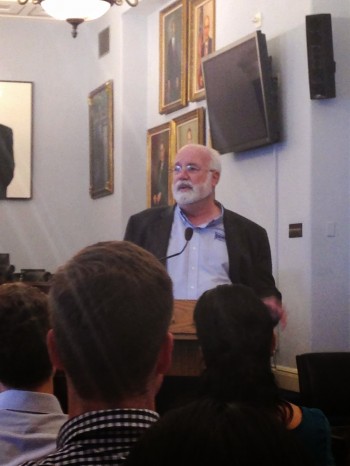 On July 1st, the Interfaith Criminal Justice Coalition held Lessons from the Field: Protecting Youth and Stopping the Cycle of Incarceration. The event focused on the importance of rehabilitation in the criminal justice system. The speaker was Father Greg Boyle, the founder of Homeboy Industries, an organization that provides wraparound services for former gang members.Homeboy Industries is the biggest program of its kind in the world.

In 1988, Father Greg Boyle founded Homeboy Industries to help local gang members, also called "homies", in the poorest parish in Los Angeles, California. The roots of Homeboy Industries started with a school for youth in gangs and a job referral program. Soon after the creation of the school, Father Boyle realized that his homies were having trouble finding jobs. In 1992 Homeboy Bakery was created; the bakery serves as a source of training as well as employment for former gang members. It is one of the most successful social enterprises of its kind. There are other enterprises at Homeboy Industries, such as Homeboy Diner and Homegirl Cafe.

As Father Boyle began to grow Homeboy Industries he realized that more wraparound services were needed, including case management, employment services, tattoo removal, curriculum and education, and mental health. Today, the program at Homeboy Industries is an 18 month program, in which former gang members receive a wealth of services. Father Boyle believes that finding a job for someone is important but without healing from the pain and receiving counseling it is likely that there will not be any stability in their lives.

His philosophy of care is based on kinship, he believes we are all dependent on each other, thus it is important to help each other. He believes that if we viewed the world through the eyes of kinship that there would be no need for justice because kinship produces justice. Through the many examples he spoke of, I learned the difficulties facing those who have served time and would like to be a productive member of society. Understanding that thousands of youth come in contact with the criminal justice system each year, it is motivating to see someone like Father Boyle continue to advocate for reform in criminal justice.

The effect of Homeboy Industries reaches farther than Los Angeles, because it also provides technical assistance to other organizations and people who would like to start similar programs. It has helped to start 46 programs in the United States and 8 programs outside of the country. Programs like Homeboy Industries demonstrate that when given the proper services, even long time gang members can be rehabilitated and become productive law-abiding members of society.

To learn more about how you can support Homeboy Industries, visit them online: www.homeboyindustries.org