NEW REPORT: Explores How States House Youth Under 18 in Prisons in the New Age of PREA Compliance and Enforcement 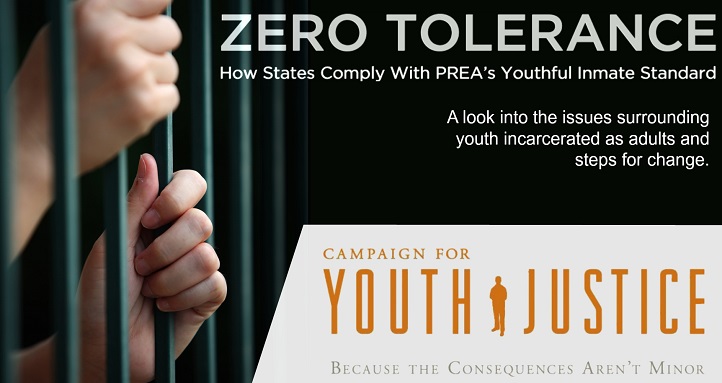 1,200 Youth Are in State Prisons on Any Given Day Across the Country

WASHINGTON (December 3, 2015) – The Campaign for Youth Justice (CFYJ), a national advocacy organization dedicated to ending the practice of trying, sentencing, and incarcerating youth under 18 in the adult criminal justice system, released a new report today, Zero Tolerance: How States Comply with PREA’s Youthful Inmate Standard. This report explores how states house youth under 18 in prisons in the new age of PREA compliance and enforcement. Furthermore, this report highlights national trends in juvenile arrests, crimes, and incarceration of children in the adult system.

The United States' extraordinary use of adult correctional facilities to house youth presents numerous concerns, including serious, long-term costs to the youth offender and to society at large. Science and research conducted over the last 20 years confirm what common sense tells us: kids are different. Despite evidence based research highlighting the harms of placing youth in adult facilities and the long term costs of incarceration to youth and society, 1200 youth are in state prisons on any given day across the country.

According to CFYJ's Policy Director and author of the report, Carmen Daugherty, there is much at stake if PREA is not enforced.

“We have seen countless stories of what happens when children are not protected while being housed in adult jails and prisons. As youth arrests decrease and states continue to improve juvenile justice systems, now is the time to remove all youth from adult prisons,” says Daugherty.

The Prison Rape Elimination Act (PREA), unanimously passed by Congress in 2003, addresses sexual assault and victimization in prisons, jails, lockups, and other detention facilities – all of which are facilities that may house youth.  With respect to the treatment of youth offender, the PREA regulations state that “as a matter of policy, the Department [of Justice] supports strong limitations on the confinement of adults with juveniles.”

Fortunately this group of inmates was not forgotten by The National Prison Rape Elimination Commission—a group of experts brought together to provide recommendations to the Department of Justice on creating PREA standards--that made strong recommendations on the removal of youth from adult jails and prisons. The PREA Commission found that “more than any other group of incarcerated persons, youth incarcerated with adults are probably at the highest risk for sexual abuse.” Accordingly, the PREA regulations include a “Youthful Inmate Standard” to protect youth in adult facilities. Specifically, the Youthful Inmate Standard provides that youthful inmates, which the standards define as “any person under the age of 18 who is under adult court supervision and incarcerated or detained in a prison or jail,” must be housed separately from adult inmates in a jail or prison, but may be managed together outside of a housing unit if supervised directly by staff.

Key findings in Zero Tolerance include:

With evidence of the decreasing number of youth entering the adult system, the report also includes a number of recommendations focusing on how states can successfully remove all youth from adult prisons.

"We recognize that implementing such a massive law with its substantial regulations will take time to trickle down to the states in a way that we, as a nation, feel like the law is “working” and a decrease in rape and abuse in prisons will be well documented," said Mistrett." We unwearyingly sit down with other advocates and policy makers to figure out how to strengthen the law. While urgency exists, we focus more on getting it right so another 12 years doesn’t pass with the same results."

For additional questions regarding, Zero Tolerance: How States Comply with PREA’s Youthful Inmate Standard, contact Aprill Turner at (202) 821-1604 or This email address is being protected from spambots. You need JavaScript enabled to view it..

The Campaign for Youth Justice, based in Washington, DC, is dedicated to ending the practice of trying, sentencing, and incarcerating youth under 18 in the adult criminal justice system.