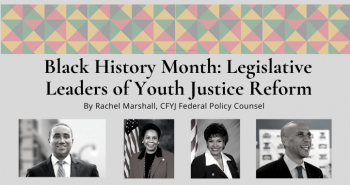 In recognition of Black History Month, CFYJ is featuring a month-long series that celebrates advocates, elected officials and spokespeople that are leading the charge to reform how youth are treated in the criminal justice system.

Throughout the last decade we have seen incredible progress in overturning laws that funnel youth into the adult criminal justice system and passing laws to reform our country’s approach for handling justice-involved youth. While youth justice advocates have worked tirelessly for these reforms, we couldn’t have done it without the support of key lawmakers and other elected officials.

From the halls of Congress to state legislatures across the country, this Black History Month we’d like to highlight some of our amazing African American legislators who have been critical to advancing reforms:

The Juvenile Justice and Delinquency Prevention Act (JJDPA) is the cornerstone piece of federal legislation that protects justice-involved youth. While the law has always had strong bipartisan support, it went unauthorized for 16 years. Thankfully, Congressman Bobby Scott (VA) jumped on board as a key champion, and in 2018, the law was finally reauthorized. In addition to strengthening core protections for justice-involved youth and ensuring youth are treated differently than adults, the updated law incorporates Congressman Scott’s Youth P.R.O.M.I.S.E. Act, which he had worked on over a decade in order to support a more holistic, evidenced-based approach to delinquency prevention.

Congresswoman Sheila Jackson Lee (TX) is another longtime youth justice advocate. The Congresswoman has continuously championed the reauthorization of juvenile accountability block grants (JABG). The goal of the JABG program is to reduce juvenile offending through accountability-based programs. The bill to reauthorize the program passed by unanimous consent in both the 115th and 116th Congresses, and we hope to finally see it introduced and passed in the Senate later this year.

In 2019, Congress gained another youth justice advocate when Congresswoman Ayanna Pressley (MA) joined its ranks. In the short time she has been in Congress, the Congresswoman has made it clear she is here to champion youth justice. In November, she introduced H. Res. 702, the People’s Justice Guarantee, which, among other things, calls for the banning of the prosecution of youth under the age of 18 in adult courts. She’s also behind the Ending PUSHOUT Act, which is meant to disrupt the school-to-confinement pipeline.

Across the Capitol lawn, Senator Cory Booker (NJ) has also supported robust reforms to our juvenile justice systems. The Senator’s Next Step Act of 2019 (S. 697) includes the REDEEM Act, which includes provisions on sealing and expungement of juvenile records; sealing of adult records; makes improvements to the ban on juvenile solitary confinement, which was passed as part of the First Step Act; and incentivizes states to pass similar laws by giving them priority consideration for COPS grants, including prioritization for states that establish age 18 as a floor for original jurisdiction in adult criminal courts.

Our champions in Congress are joined in their commitment to youth justice reforms by state legislators across the country. Indiana State Senator Jean Breaux is leading the charge to get youth transferred to the adult system out of adult jails and lock-ups in order to ensure the state is in compliance with the reauthorized JJDPA. She’s joined by State Senator Don Davis in North Carolina, who was the primary sponsor of a 2019 bill to amend the state’s “Raise the Age” law to clarify that youth under 18 who are detained pre-trial must be held in a juvenile detention facility.

Beyond jail removal, in Maryland, State Senator William Smith recently took over as chair of the Judicial Proceedings Committee. Senator Smith says he plans to prioritize youth justice reform, including eliminating juvenile life without parole sentences and raising the age of juvenile court jurisdiction. In June of 2019, Florida’s First Step Act was signed into law, which included language from several bi-partisan bills, sponsored in part by Senator James Bush and Senator Randolph Bracey, to limit the transfer of youth to adult court. HB 7125 eliminated Florida’s mandatory direct file statute which required prosecutors to automatically file certain youth cases in adult court.  Now, every decision to prosecute a youth requires the discretion of either a juvenile court judge or a prosecutor. And while he’s no longer in office, former Iowa State Representative Wayne Ford has been crisscrossing the country advocating for states to require racial impact statements. Mr. Ford was the author of the nation’s first racial impact statement law, which requires legislators to consider how any proposed criminal legislation may disproportionately impact minorities, which will hopefully lead to a decrease in racial and ethnic disparities in our criminal and juvenile justice systems.

At the local level, New Orleans City Councilman Jason Williams has tirelessly pushed back against the city’s District Attorney’s punitive approach to dealing with justice-involved youth. Councilman Williams, who chairs the Criminal Justice Committee, convened a hearing last August specifically to focus on the harms of holding youth in adult jails and urged the city to do more to keep New Orleans youth out of the adult jail.

Federal, state, and local lawmakers are not the only elected officials pushing for and supporting reform efforts. Prosecutors across the country have taken up the mantel of youth justice reform. In St. Louis, Missouri, Circuit Attorney Kim Gardner has committed to ensuring successful implementation of the state’s raise the age law. She has also instructed prosecutors to recommend pretrial release on lower-level charges and declined cases from law enforcement officers if the office had concerns about the credibility of the officer’s testimony. In Illinois, Kim Foxx is the first African American woman to lead the Cook County State’s Attorney’s Office. Prior becoming the State’s Attorney, she served as an assistant state’s attorney in the juvenile division. From helping pass legislation to stop the automatic transfer of youth to the adult system to fighting back against juvenile life without parole sentences, Foxx has dedicated her career to taking a developmentally-appropriate response to justice-involved youth.

As we continue to fight for reforms across the country, we are glad we can rely on elected officials at every level. And, as we head into election season, let these great leaders serve as a reminder of the importance to vote youth justice.