On Wednesday, July 30, the fellows of Campaign for Youth Justice (CFYJ) held their second Summer Institute session featuring guest speaker Reverend Laura Downton, of the National Religious Campaign Against Torture (NRCAT). Rev. Downton is the current Director of U.S. Prisons Policy & Programs at NRCAT, and she also serves on the Board of Directors for Grassroots Leadership and is a Provisional Elder in the Baltimore-Washington Annual Conference of The United Methodist Church. The CFYJ fellows were joined by interns from the Justice Policy Institute, Washington Peace Center, and students from American University, Georgetown University, and University of North Carolina-Chapel Hill, who are current interns in Washington, DC.

CFYJ fellows were excited to learn more from Rev. Downton on the effects of solitary confinement and the campaigns that NRCAT has worked on in order to reduce and ultimately eliminate the time that people spend in isolation. Rev. Downton discussed the harmful physiological effects of solitary confinement – the erosion of connections in the brain is similar to that of a traumatic brain injury. This is so extreme that international standards consider solitary confinement to be psychological torture after 15 days. Laura juxtaposed this with a video clip of a 2013 California legislative hearing in response to the CA prisoner hunger strike in which over 30,000 incarcerated people took part to protest torture. Returning citizens and family members of those incarcerated shared the detrimental impact it has on a person as well as extreme examples of time spent at one time – isolation lasting as long as 23 years. 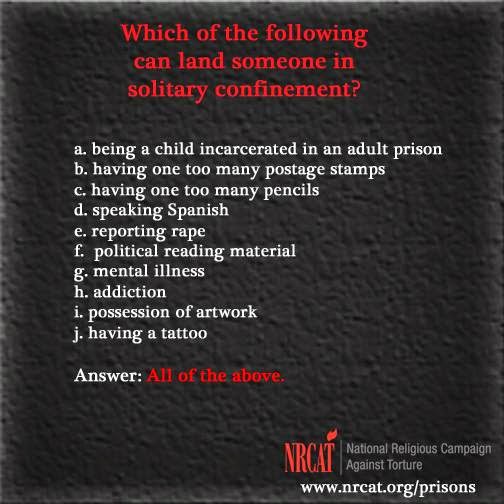 The issue of solitary confinement is particularly significant for youth in the adult criminal justice system. Often, solitary confinement is used against youth as a means of “protection,” since youth are not safe in the general adult population. Rev. Downton mentioned how the UN Special Rapporteur on Torture has categorized putting a youth in solitary confinement for even one day to be torture. She went on to share that young, developing brains are extremely vulnerable to the psychological trauma, and that being put in solitary does not allow them the physical activity and space needed for their healthy development. This poses an innate problem with youth being incarcerated in adult facilities – research shows that youth are not safe intermingling with the adult population, and the alternative of solitary confinement is dangerous and traumatizing.