2019 Legislative Reforms After Raise the Age 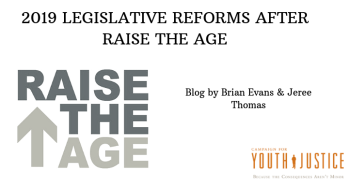 Michigan’s legislature recently passed bill packages in the House and the Senate to raise the age.  Once reconciled and signed by Governor Whitmer, Michigan will join the five states listed above that are currently preparing to fully implement their laws. This will leave Wisconsin, Texas, and Georgia as the final three states that still automatically treat all of their seventeen-year-olds as adults simply because of their age.

According to the Justice policy Institute, ,historically  states that have raised the age have utilized the opportunity to pass additional reforms to rightsize their juvenile justice system. This legislative session, the states preparing to implement their raise the age laws are following a similar path. Here are a few of the legislative reforms introduced this year to support the successful implementation of their raise the age laws.

We are incredibly proud of our state partners for championing the passage and now the implementation of Raise the Age in their states. While the number of youth prosecuted as adults due to lower ages of criminal responsibility has decreased from 190,000 in 2007 to 76,000 in 2017; once the reforms in the second “tier” of raise the age states are enacted, we expect this number to be halved again as a result of their efforts.  As this legislation indicates, passing raise the age is an opportunity for further reform to rightsize the juvenile justice system and improve long-term outcomes for youth.