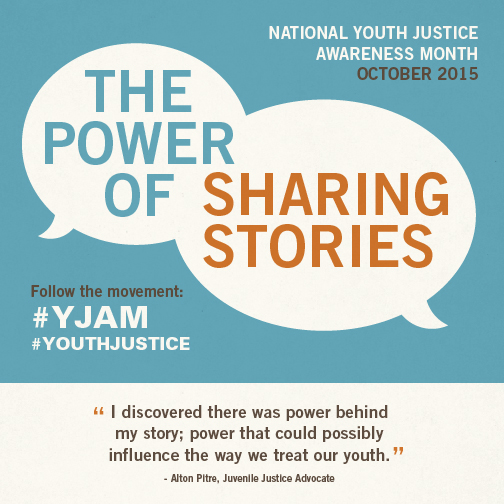 Several years ago I found myself facing adult time as a teen in Los Angeles. I was held in detention for two years, serving dead time fighting my “fitness,” a court process where they were “determining” if I would be tried as a juvenile or an adult for a crime for which I was later exonerated. Presuming that I would be charged as an adult, I was housed separately from other youth in the detention center, even though we were all the same age. Through the years I spent pending my trial and since my release, I’ve learned that the juvenile justice system is failing our youth all over the nation, and it is time for everyone to realize that in its current state it is destructive and ineffective. I am constantly amazed yet distraught at how America treats its youth who are in essence its’ most vulnerable and teachable citizens. It’s true when people say that our children are the future but how can they ever be if they are often thrown away to die in prison? Sadly, the United States is the only country that does so.

When kids are locked up as adults they are immediately subjected to punishment instead of rehabilitation. Hence, they are deprived of the care and treatment necessary to turn their lives around; instead they are exposed to threats and acts, of physical, sexual and mental trauma and abuse. For their “protection” from this abuse, they are welcomed into the beautiful world of solitary confinement, burying them alive and permanently interrupting healthy brain development.

I have countless childhood friends who have lost the rest of their fruitful lives to the prison system. Yes, children will make mistakes; some will make bad mistakes depending on the type of environment they were raised in and the supports they had (or lacked). However, children shouldn’t be judged solely on the type of crime they committed but also considering the contributing background factors leading up to why they did it.  They should have the chance to learn from their mistakes and choose differently.

Currently, I am a  24-year-old, full-time student at Morehouse College and ambassador for juvenile justice reform. Through sharing my story of overcoming both the mean streets of Los Angeles and incarceration, I have been able to travel the country writing and speaking about this injustice. I have written op-eds that have gained the likes of U.S. Senator Cory Booker, Michael Eric Dyson, Rosie O’Donnell, and Orange is the New Black’s author Piper Kerman, all, who have shared them on their Twitter accounts.In California, I participate in lobbying efforts with the Anti-Recidivism Coalition (ARC), advocating for legislation that provides second chances to youthful offenders. This September, ARC helped passed SB261, which extends parole eligibility to 16,000 offenders under the age of 23. I also visited D.C. with ARC on a policy trip advocating for criminal justice reform at the White House.This summer, I visited Washington D.C. again, interning with First Focus, a bipartisan children’s advocacy organization where I was able to extend my political advocacy on a national level. There I attended congressional briefings and met with members of Congress, advocating for reauthorization of the Juvenile Justice and Delinquency Prevention Act. The JJDPA addresses youth in detention by providing funding to state programs that serve at-risk youth, addressing disproportionate minority contact (DMC) and removing status offenders from secure detention and youth from adult jails, or at least ensuring sight and sound separation. You can take action for the JJDPA here.

The practice of locking up and trying kids as adults is harmful to our youth and the world. Youth sentenced as adults are often condemned without a chance to redeem their freedom, even after they have been truly rehabilitated and served many years in prison. It is imperative that awareness of this devastating problem is brought to the attention of everyone in our nation, especially our law enforcement and policymakers. No child should be subjugated to this type of tyranny.This month is Youth Justice Awareness Month (YJAM). As fellow caring human beings and advocates for justice, now is the time to challenge ourselves to get involved in this movement. We must use our personal stories and experiences to change the minds and hearts of those in power. Our children deserve to be treated like the children they are.