Is it Enough: Implementation of PREA’s Youthful Inmate Standard 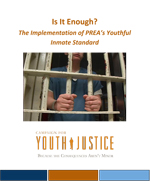 For Youth Justice Action Month CFYJ released its report, “Is it Enough: Implementation of PREA’s Youthful Inmate Standard” in recognition of the 15th Anniversary of the Prison Rape Elimination Act (PREA). PREA is a federal law enacted to address the problem of sexual assault and rape in U.S. detention centers, jails, lock ups, and prisons. Regulations for the law specifically address one of the most vulnerable populations in adult jails and prisons, youth under age 18.

In light of the 15th Anniversary of PREA, CFYJ reviewed over 800 audits of adult correctional facilities, with a focus on the first complete audit cycle, to identify how the facilities are complying with the Youthful Inmate Standard. The key findings are included in this report.