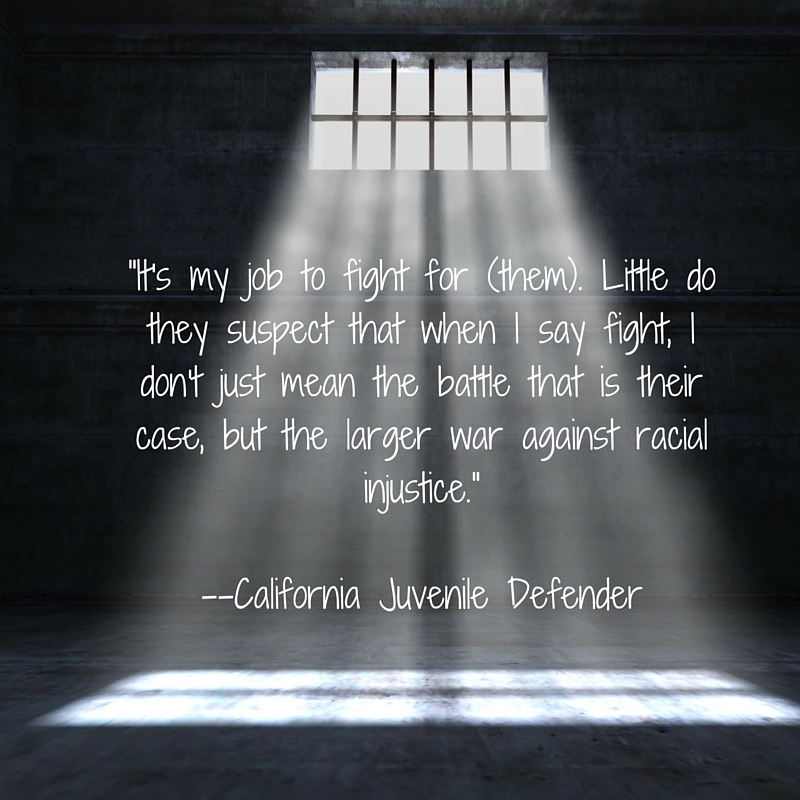 Police reports, witnesses, special needs, poverty, illegal searches, inadmissible evidence—these are just some of the case components defenders must juggle when defending youth. A defender is trained to understand and maneuver around such obstacles yet, what becomes more difficult to understand and articulate to a client is a barrier so high in our juvenile justice and criminal justice systems, that despite recognizing it, there is no way over, under, or through it. Racial injustice. In 2010, African American youth made up 17% of the juvenile population but 33% of the delinquency caseload. How does a defender explain that while the “perception of innocence is a central protection afforded to children” such a consideration “may not be given to the children of dehumanized groups, such as Black Americans”? Today we hear from a few defenders across the country and their perspectives on race.

California Bay Area Juvenile Defender: "Hope for the best, prepare for the worst." This the mantra that I make my clients repeat back to me at the end of every meeting, especially the ones in juvenile hall. Because what those clients hope for, more than anything, is to just go home. I promise to stop smoking pot, they tell me. I promise to go to school. I'm not a bad kid. I just made a mistake.... Why, they ask me, why won't the judge let me out?This question when posed by my African American clients - the why - is particularly heartbreaking. If I tell them the truth - that black youth are overrepresented in the system, that implicit and explicit historical and present racial biases have led to them getting kicked out of school, overcharged, detained, incarcerated longer - that the color of their skin has largely defined this whole juvenile justice experience - how could they possibly have hope?

Instead, I tell them not to worry. Concentrate on yourself, keep doing well. It's my job to fight for you. Little do they suspect that when I say fight, I don't just mean the battle that is their case, but the larger war against racial injustice.

Children of color get swept into the system, often stemming from school arrests.  Frequently the thought process is that these arrests are to help a child and provide services.  Well, arrests certainly don’t help these children in the future, and as for services, we’re in a state that keeps the purse strings pretty tight.  Sorry kid.

The irony is never lost on me when I’m heading to court and I jaywalk or walk against the light in the presence of law enforcement.  I have an important hearing on probable cause or I’m challenging a case because of an illegal stop.  Anyway, I’m exempt from being stopped; I’m an old white guy in a suit.

Eric Zogry, North Carolina State Juvenile Defender: ¨As an in court defender, my enlightenment regarding “the system” arrived when I simply looked around me.  Not at my clients, or the other black and Latino juveniles that made up the vast majority of our caseloads – that was obvious.  What I recognized was that, even though we had a black prosecutor, black juvenile justice workers, and even a black judge, my client was still getting buried under the system.  While individual discrimination and implicit bias remains, it was then I knew that the juvenile justice system, itself, was a root cause of racial bias.As a state-wide director, it was no surprise that most juvenile defenders could recognize the problems of overrepresentation, racial disparity and institutionalized racism.  But the true hard work as defenders is recognizing and accepting that we are part of the problem.  What decisions do we make when we first see our clients of color?  Do we afford them the same benefits we do our white clients?  Or do we cut corners, relax efforts, and fail to attack the system itself for fear of inevitable defeat? Our practice, our profession needs to reach inward first to honestly address our contribution to this state of discrimination.

This week, join the conversation on racial and ethnic disparities by using the hashtag #YJAM.  Below is sample language you can share on social media:TWEETSDuring arrests, hearings, sentencing, and even treatment while incarcerated, youth of color are treated worse than whites. #YJAM

Racial disparities in the justice system are tied to many issues including income inequality, racism, and lack of opportunity. #YJAM

Many youth of color who are charged with felonies can't vote, can't find employment, and can't find housing. #YJAM

Latino children are also 40% more likely than white youth to be admitted into adult prison #YJAMFACEBOOKPresident Barack Obama has signed a proclamation declaring October 'National Youth Justice Awareness Month' and calls on Americans to "observe this month by getting involved in community efforts to support our youth, and by participating in appropriate ceremonies, activities, and programs." http://sparkaction.org/content/president-proclamation-yjam #YJAM #youthjustice #JJDPAmatters

Youth of color prosecuted and incarcerated as adults are disproportionately over-represented in the justice system. The issue of youth incarcerated as adults has demanded the attention of the nation, especially since President Barack Obama has signed a proclamation declaring October 'National Youth Justice Awareness Month' http://sparkaction.org/content/president-proclamation-yjam #YJAM