Stories from Mothers of Incarcerated Youth 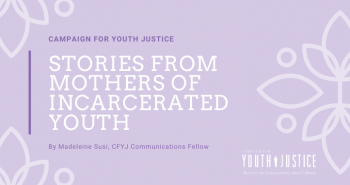 As Mother’s Day approaches, we set aside time to celebrate and honor those who have played a maternal role in our lives. For many people, this day is filled with gratitude and joy as they are able to spend time with their families. Still, for many children and mothers, today surfaces feelings of isolation and pain.

According to the 2019 Prison Policy Initiative Report on Youth Confinement, over 48,000 youth in the United States are detained in facilities away from home on any given day; nearly 4000 of whom are detained as minors in adult jails and prisons. This means that tens of thousands of mothers will be separated from their children today due to incarceration. While many of these women are fighting to improve conditions for their incarcerated children and to end the stigmatization of families caught up in the criminal justice system, they are still forced to endure separation on a day dedicated to love and togetherness.  We are particularly sensitive to this in 2020, as COVID-19 leaves many children behind bars, particularly those pending adult sentences or those sentenced already as adults. We know their loved ones' worry is elevated as the prisons are showing high rates of infection with the virus.  .

Today, in order to honor women who are not often given the recognition that they deserve, we would like to share some stories told by mothers of incarcerated youth:

Though today is meant to celebrate those who have played a maternal role in our own lives, it is important to remember those who may not be able to be with their children today.  The criminal justice system has separated thousands of families and we must continue to fight for juvenile justice reform. For more information on the injustice that still exists in the juvenile justice system today, visit http://www.campaignforyouthjustice.org/