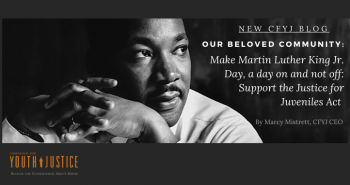 It’s a nice coincidence that the much awaited film based on Bryan Stevenson’s life, Just Mercy, launched just weeks before the country celebrates the birthday of one of our greatest social justice warriors, Dr. Martin Luther King, Jr., who would have been 91 today had he not been assassinated.

Dr. King upheld the principles of justice, equal opportunity and love in his call for a Beloved Community. He was arrested and jailed 29 times; so was no stranger to the mistreatment inmates received in southern jails, including in Montgomery, AL, the same city where Stevenson’s Equal Justice  Initiative was founded.  He was able to see humanity in his oppressors, and found forgiveness for those who committed harm against him and his family.

Just Mercy gives us all the opportunity to practice these same principles today, including for children who, often based on something as simple as their age and alleged charge, are charged as if they were adults. Bryan Stevenson aptly titles the two chapters in his book dedicated to children as “Surely Doomed” and “All God’s Children.” He says, “How easily we condemn people in this country, and the injustice we create when we allow fear, anger and distance to shape the way we treat the most vulnerable among us.” (p. 14).

He calls on us to remember Charlie who, at age 14, was sent to an adult jail where he was sexually assaulted so repeatedly that remained mute for hours; a fate that happens in adult jails five times as often as children in the youth system. Trina, 14; Ian, 13; Antonio, 14, all sentenced to juvenile life without parole for crimes that, if they had been adults when they were sentenced, would have received 10-25 years. And, Stevenson reminds us, that we have been treating Black children this way for a VERY long time.  In 1930, two of the Scottsboro Boys, Eugene Williams and Leroy Wayne, were both 13 when they were sentenced to life; and in 1944, we executed George Stinney, age 14. At the Campaign for Youth Justice we continue to say these names, and those of many others, whose parents fight every day for justice in a system that is deaf to their cries.

Just Mercy also calls on us to get proximate to people who are incarcerated, and to those who are vulnerable; to learn (or be reminded) that “each of us is more than the worst thing we have ever done”—even those who commit acts of violence. As we work with children who were treated as adults across the country, we are reminded of this every day; and through their courage, pain, and advocacy, we see them start to change the false narratives of fear and brutality that our society has too easily labelled them.

So in honor of our Dr. King’s birthday, and in recognition of the power of justice, we ask you to, instead of taking a day off, to make today a day of action. There is a federal law called the Prison Litigation Reform Act (PLRA). Passed in 1996, it was designed to prevent “frivolous” lawsuits by requiring that anyone who has been harmed while incarcerated to exhaust any and all administrative remedies before they can file a lawsuit. The PLRA also restricts the power of federal courts to make and enforce orders that remedy unlawful prison or jail conditions. Under current law, children are required to also follow these rigid requirements. We need look no further than the front page of any newspaper to see that the abuse, sexual assault, isolation, and maltreatment of children persists in the justice system (both juvenile and adult).