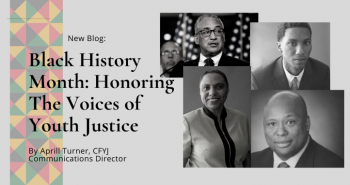 In recognition of Black History Month, CFYJ will feature a month-long series that celebrates advocates, elected officials and spokespeople that are leading the charge to reform how youth are treated in the criminal justice system.

Black History Month is a time to celebrate and remember all the ways that African Americans have contributed to our history and culture. It is also a time to reflect on the ills that still plague us as a nation -- and to learn from the injustices and adversities the Black community has faced.

The story of Black History in the U.S. begins in 1619 when the act of slavery was brought to America. 50 years after slavery ended, its stain lived on. Beginning in the 1920’s progress was made through the courts laws and organizing such as, separate but equal laws, voting rights, the creation of the NAACP, civil rights and the notable, “I Have a Dream” speech, all marked pivotal transformations in U.S. history. Thus, in honor of this month, the sacrifices made by many Black social justice activists and advocates remind us of the constant struggles that were endured to obtain freedom and equality for all.

This history has led to the injustices that still plague our criminal justice system, in which youth of color are overrepresented at nearly every point of contact within the justice system—and the finding is disturbingly persistent over time. Youth of color are more likely to be incarcerated and to serve more time than white youth, even when they are charged with the same category of offense. And despite tremendous reforms in removing youth from the adult system and from secure custody, the racial disparities are increasing. A decade ago, youth of color were 69 percent of those sentenced as adults; in 2015, that number had grown to 80 percent.

Throughout history, Black leaders and activists have worked to address the ways Black people are disproportionately affected by unjust systems in America. Their work has set the foundation for many modern-day movements. Today, we stand in their legacy and are proud to continue to contribute to the work they began.

During Black History Month we plan to use this space—and our social media channels—for reflections on current efforts to right our very broken criminal justice system. We celebrate the heroes and heroines who have used the injustices in their own lives as well as the injustices they have witnessed others experience to fuel their resolve and empower all of us to be advocates for change.

This month we ask you to join us in reflecting on the “fierce urgency of now” expressed by Dr. Martin Luther King Jr., 57 years ago, that burns in those on the daily front lines of criminal justice reform. That urgency still lives on—and we thank those that work to lead change.

The legacy of America and the fight for freedom is Black history, and we are committed to this battle not just throughout the month of February, but every day of the year. Please follow CFYJ on social media this month using the hashtag, #BHMYouthJustice as we highlight Black youth justice voices.