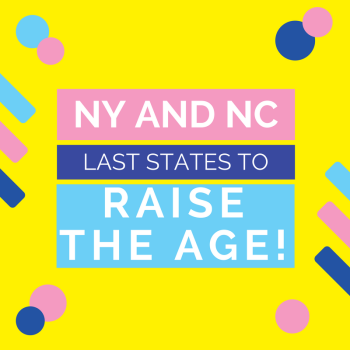 2017 marks a historical milestone in the United States’ juvenile justice system.    After decades of advocacy, New York and North Carolina both passed legislation to raise their age of juvenile court jurisdiction to 18.  When both laws are fully implemented in 2019, it will be the first time in US history since the creation of the juvenile court that no state will automatically treat 16 year olds as adults solely because of their age.  While a vast majority of states treat individuals under 18 as youth and therefore start them in juvenile court, this age has never been uniformly agreed upon.

16 year olds have been treated as adults since 1909 in New York and 1919 in North Carolina.  Every 16 and 17 year old arrested in these two states, has been denied the benefits of the rehabilitative focus of family or juvenile court—instead, they were considered adults and went to criminal court, where they began to accrue a permanent adult record. While five other states continue to set  the age of criminal responsibility at 17 (Georgia, Michigan, Missouri, Texas & Wisconsin); the remaining 43 states and DC have now established or recently passed legislation to set 18 as the age where all arrests begin in criminal court.
“Over the past decade, research on adolescent development, public safety outcomes, and costs have begun to bring states into alignment around establishing 18 as the age of criminal responsibility,” says Marcy Mistrett, the CEO at the Campaign for Youth Justice. “This has led to a tremendous number of youth being blocked from the adult system, and benefitting from the protections of family court.”

In 2007, it was estimated that 175,000 children under age 18 were being prosecuted as adults because several states (13?) automatically treated youth under 18 as adults.  .  By 2014, this number dropped to 90,900 after Connecticut, Mississippi, Illinois, Massachusetts, and New Hampshire all raised the age to 18.  In 2016, South Carolina and Louisiana followed suit, and have been followed by North Carolina and New York in 2017.  When these most recent four states begin to implement their reforms in 2018 and 2019, the number of youth prosecuted as adults because of lower ages of juvenile court jurisdictions will again drop in half, to an estimated 45,000 youth per year.

While states are moving rapidly toward uniformly establishing 18 as the age of criminal responsibility, there are still thousands of youth under age 18 who will continue to be prosecuted as adults. Every state has multiple transfer mechanisms that allow children, in some states as young as seven, to be transferred into the adult system if they are charged with certain offenses.  Often, these transfers are automatic, with no chance for a juvenile court to consider the unique needs of the child.

All ten states that have raised the age of juvenile court jurisdiction to 18 in the past decade have still excluded some children, based on their alleged offense, from the benefit of judicial review..  In addition, 12 states  and DC still allow prosecutors to direct file children into the adult system.   According to Peter Lehmann’s recent article, Sentencing  Transferred Juveniles in The Adult Criminal Court: The Direct and Interactive Effects of Race and Ethnicity, in states like Florida, direct file and statutory exclusion from juvenile court have led to longer jail and prison sentences for transferred Black male youth.

“While the number of youth charged as adults has dramatically fallen, there is more work to be done,” says Mistrett.  “We can’t rest until we know every child has his/her case independently reviewed by a trained juvenile court judge. We know that outcomes for children and public safety improve if all our children are treated as children.”

Today we celebrate major milestones that will keep the vast majority of high school juniors out of the adult system. We look forward to the day when all children under 18 will be given the same treatment.