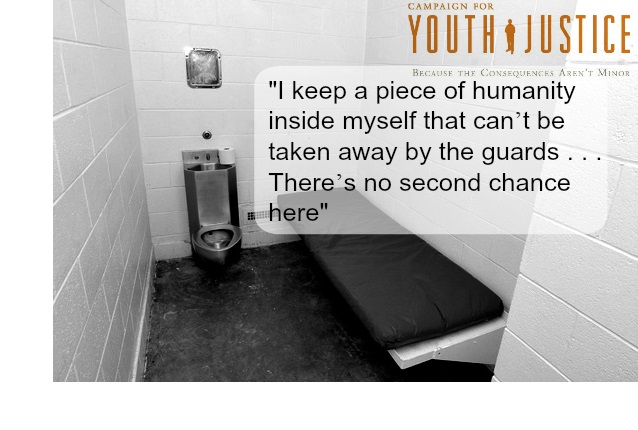 “Being in a room over 21 hours a day is like a waking nightmare, like you want to scream but you can’t. You want to stretch your legs, walk for more than a few feet. You feel trapped. Life becomes distorted. You shower, eat, sleep, and defecate in the same tiny room. In the same small sink, you “shower,” quench your thirst, wash your hands after using the toilet, and warm your cold dinner in a bag. I developed techniques to survive. I keep a piece of humanity inside myself that can’t be taken away by the guards . . . There’s no second chance here.”

These are the words of a young girl named Lino Silva – but this wasn’t written decades ago during a World War and it wasn’t written from a gulag in some far-off, brutal dictatorship.  A child wrote this in a youth facility in California.

It is terrible to think that any child would be forced to live such an experience anywhere at any time.  But the truth is that these same words could be written by thousands of children any day in America if they are held in our criminal justice system – either in youth facilities or in adult jails and prisons.

While in solitary, youth are locked in a cell for 20 hours or more a day with limited access to exercise, reading and writing materials, contact with family members or other human beings, educational programming, drug treatment, or mental health services. Although solitary confinement is well known to harm even previously-healthy adults, for children, who have special developmental needs, the damage is even greater. Young people’s brains are still developing, placing them at a higher risk of psychological harm when subjected to isolation and sensory deprivation. Indeed, the vast majority of youth suicides occur in isolation.

This is bad enough, but these negative effects on kids are usually exacerbated by that the fact that youth frequently enter such facilities with histories of substance abuse, mental illness and childhood trauma, which are only aggravated by the stark deprivations of solitary confinement.  Moreover, in solitary confinement access to programming and pro-social development that might facilitate a youth’s rehabilitation is virtually nonexistent.

Why would we ever subject our kids to such treatment?  Fortunately, the public, our political leaders, doctors, lawyers, families, and enlightened corrections and juvenile justice officials across the country are increasingly asking this question and coming up with the same answer:

We must never subject kids to solitary confinement.

Efforts are now underway to end this barbaric practice.  Legislators in some states, like New Jersey and Nevada, have passed laws to limit solitary confinement of youth in their juvenile justice systems.  At the federal level, several bipartisan bills, the REDEEM Act, the Mercy Act, the Sentencing Reform and Corrections Act have also been introduced to end the practice for youth held under federal jurisdiction.  And some states, for example New York and Massachusetts, have moved away from using solitary confinement in their juvenile systems.  Internationally, the United Nations Special Rapporteur on Torture has called for a global ban on the solitary confinement of children under 18.  But we need more!!  Thousands of kids are still subject to this practice in our backyards.  It’s now time for every state and community in the United States to act in the best interests of our children and STOP Solitary for all youth.

This week, join the conversation on solitary confinement of youth by using the hashtag #YJAM. Below is sample language you can share on social media! 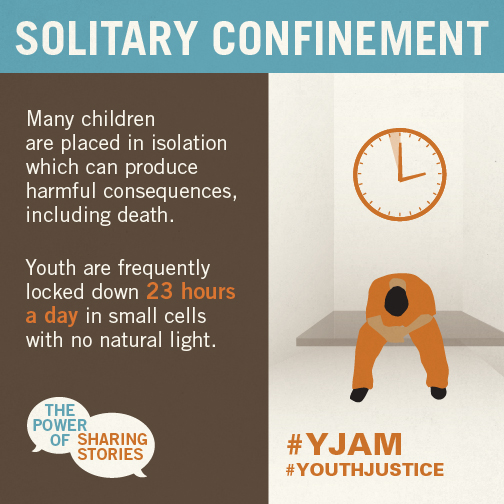