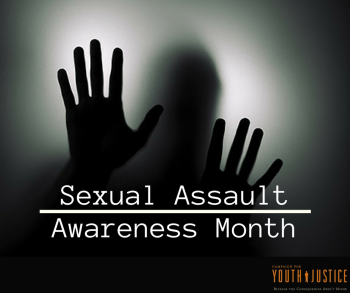 By William Tipton, CFYJ Policy & Research Fellow and Terri Poore, MSW, Policy Director at the National Alliance to End Sexual Violence.April is Sexual Assault Awareness Month. This month, the National Alliance to End Sexual Violence (NAESV) and the Campaign for Youth Justice (CFYJ) are partnering to highlight those vulnerable youth living in adult jails and prisons across the country as well as those laws and policies that can protect and support incarcerated youth if properly implemented.

The American prison system has a reputation for being unsafe, particularly for those at an elevated risk of being victims of sexual violence. In the Prison Rape Elimination Act of 2003 (PREA), Congress noted that “juveniles are 5 times more likely to be sexually assaulted in adult rather than juvenile facilities- often within the first 48 hours of incarceration,” and therefore they need special protections. In 2012, the PREA regulations were finalized and created national standards for lock ups, jails, detention centers, and prisons across the country.  Section 115.14, the Youthful Inmate Standard applies to all individuals under 18. The standard requires that youth must be separated from the adult inmate population. Correction officers must prevent youthful inmates from having sight, sound, or physical contact with adult inmates while in housing units. While outside of housing units, the sight and sound separation must continue or the correctional facility must provide direct staff supervision of its youthful inmates.States that do not properly implement the youthful inmate standard or the other PREA standards must use 5 percent of its designated prison funding from the Department of Justice to come into compliance with the standards.  Under the Justice for All Reauthorization Act of 2016 (JFA) states are now under a six year deadline to comply or risk losing a percentage of their funding. This deadline along with a new requirement to make audits of facilities publicly available will promote transparency, compliance, and increased protection for youth in adult facilities. In addition to the PREA standards and amendments in the JFA, as of August 8, 2016, programs that receive funding from the Victims of Crime Act (VOCA) may use those funds to support sexual assault victims in detention and correctional facilities. This means that states may now allow service providers to use VOCA funding to serve incarcerated youth who are victims of sexual violence.  This is a significant change that could help heal those youth and young adults who have experienced the physical and emotional trauma of sexual abuse. NAESV and CFYJ encourage states to consider the following policy changes to protect youth who have been prosecuted as adults:

During Sexual Assault Awareness Month, we hope states and advocates will continue to move and push toward policies and procedures that will end sexual violence for youth who are tried, treated, and incarcerated in the adult criminal justice system.