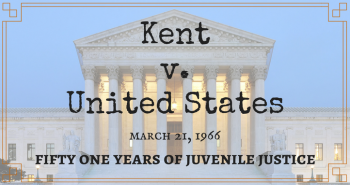 March 21, 2017 marks the fifty-first anniversary of Kent v. United States, 383 U.S. 541 (1966).  In Kent, 16 year-old Morris Kent was arrested in Washington D.C. for various charges.  Kent was placed in police custody for 24 hours, and while in custody he was questioned repeatedly about the alleged offenses.  He eventually admitted to some of the offenses.  Kent’s mother hired an attorney to handle his case, and together they prepared to enter the juvenile court system.  But what happened next would unexpectedly define a generation of due process rights for youth waived to the adult criminal justice system.

At age 16, Kent was subject to the “exclusive jurisdiction” of the District of Columbia Juvenile Court. The D.C. Juvenile Court could only waive jurisdiction after a “full investigation” of the question of waiver. In Kent’s case, the Juvenile Court waived its jurisdiction without a hearing or allowing Kent’s counsel to access important Court Social Service files.   As a result, Kent’s counsel argued that the waiver was invalid, but the District of Columbia U.S. District Court dismissed Kent’s claim and tried him as an adult. On September 25, 1961, he was convicted as an adult.Kent challenged his conviction in the Court of Appeals where he lost again, so he filed a writ of certiorari to the United States Supreme Court.  On March 21, 1966, five years after his indictment, the Supreme Court ruled that the waiver of jurisdiction by the Juvenile Court was invalid because the Juvenile Court had not actually conducted an appropriately extensive investigation.  The Juvenile Court’s procedural process was insufficient “to satisfy the basic requirements of due process and fairness, as well as compliance with the statutory requirement of a ‘full investigation’.”  Kent, 383 U.S. 552-554.Kent v. United States is a landmark decision that established a bar of due process for youth waived to the adult system. Since the decision, legislatures across the country have passed laws protecting the rights of youth who become involved with the justice system, but there is still a lot of work to do. Justice-involved youth deserve to be treated as youth, in a system designed to meet their rehabilitative needs, that is, the juvenile justice system, NOT the adult system.We cannot allow unjust practices, like those attempted against Morris Kent over fifty years ago, to be committed against our youth moving forward. The anniversary of the Kent decision reminds us that every single victory, big or small, is a key step towards creating better outcomes for our youth. Half a century later, the fight continues, and so does the hope that soon, no children will ever end up in the adult justice system.