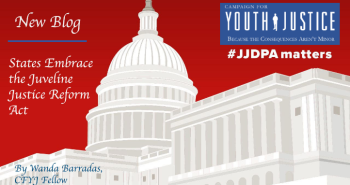 In the last few weeks of the 115th Congress, and after letting the law go unauthorized for nearly 16 years, Congress finally passed H.R. 6964, the Juvenile Justice Reform Act of 2018 (JJRA), which reauthorized the Juvenile Justice and Delinquency Prevention Act (JJDPA). This critical federal law improves the conditions for youth involved in the juvenile justice system across the country, and the reauthorization made critical updates to the four core protections for justice-involved youth provided by the law:

While many of these changes either only recently took effect or will be slowly phased in over the next few years, several states have proactively introduced and passed legislation that will hopefully put them in compliance with the updated law.

As noted above, the JJRA extends the jail removal core protection to keep youth awaiting trial in criminal court out of adult jails and lock-ups. While many states’ laws do allow youth tried as adults to be held in juvenile facilities pre-trial, it does not always happen in practice. While states have until 2021 to fully implement the updates to the jail removal core protection, many states decided to take action this year. For example, Nevada passed a bill requiring their Committee on Child Welfare and Juvenile Justice to study the detention of children in the state under AB 449, including requiring a “review of the programs and services in other states where juvenile offenders who are tried as adults are housed with juvenile offenders within the juvenile justice system.” Oregon also passed SB 15, authorizing Youth Development Division to inspect and collect data from facilities in which juveniles are detained to ensure compliance with the federal JJDPA. Conducting these kinds of studies will allow states to be accountable and recommend potential legislation to ensure they are fully in compliance with the updated jail removal core protection.

Some states have gone one step further and amended their laws to remove youth tried as adults from adult jails and lock-ups. Washington passed HB 1646, which requires youth transferred to the adult system to be placed in a juvenile correctional facility until the age of 25.  North Dakota also passed HB 1076, which removes language that allowed youth prosecuted as adults to be transferred from a juvenile facility to an adult prison before their eighteenth birthday. North Carolina, also passed SB 413 that clarifies that once their raise law is implemented on December 1, that youth will also need to be removed from adult jails.  More recently, HB 4140 and HB 4135 were just signed into law on October 31st, raising the age of juvenile court jurisdiction from seventeen to eighteen in Michigan. However, in the final passage of the bill, Michigan still allows youth charged as adults to be detained in adult facilities.

Several states have proposed bills that address jail removal, but failed to move the bills forward. For example, Florida attempted to pass SB 870, which would have prohibited children transferred to the adult criminal justice system from being held in an adult jail or other facility awaiting a trial, but the bill died in the Criminal Justice Committee. Texas proposed a bill, HB 344, that would raise the age of criminal responsibility from 17 years of age to 18 years of age, but it also failed to move. While it is unfortunate that these bills did not progress this legislative session, it at least shows that state legislators are taking proactive steps to move towards compliance with the updated law.

Unlike the previous version of JJDPA, the reauthorization also gives more explicit directions to state and localities to plan and implement data-driven approaches to reduce racial and ethnic disparities in their juvenile justice system. One trend we have seen in states to address racial and ethnic disparities is the adoption of racial impact statements. These racial impact statements and other explanatory statements guide policymakers to assess how proposed sentencing initiatives impose racial disparities in the criminal and juvenile legal system prior to adoption and implementation. Addressing how legislation can worsen racial disparities before it is adopted is more effective than trying to reverse policies that are already implemented.

For example,Vermont passed H 381, an act relating to racial impact statements that have to be prepared for each potential bill, resolution, or amendment. Other states are still working on passing similar legislation including Illinois, Oklahoma, and New York. They have proposed SB 1485, SB 253 and S 4388, respectively, but the bills are still being referred and reviewed in different committees. The bills would also require racial impact statements to be accompanied with any proposed bills, including modifications within each one.

H.R. 6964 provides some additional restrictions around the valid court order (VCO) exception for purposes of detaining a young person charged with a status offense. States have already started to introduce and pass laws that require procedures ensuring that any youth charged with a status offense who is held in a secure detention facility or correctional facility does not remain in custody longer than the time authorized by a court, and some states have gone as far as eliminating the use of detention for status offenders.

The governor signed SB 5290 in Washington, which eliminates the use of the VCO exception to place youth in detention for non-criminal behavior. Previously, Washington was one of the top states in VCO usage. South Carolina also put forward HB 3297, which would distinguish between status and criminal offenses and decrease the length of time a youth can be held for committing a status offense.  The bill was referred to the Committee on Judiciary, but has not progressed since the beginning of the year.

Aside from the updates to the four core protections, the JJRA made quite a few other updates to the law. For example, states are now required to come up with reentry plans to ensure youth successfully transition back plans to their communities. Wyoming passed HB 44, which allows the expungement of juvenile court records and would ensure a smoother re-entry process. Other states are still working on reentry bills and continue to propose legislation that improves access to mental health treatment, addresses the needs of Tribal youth, and improves conditions in youth facilities.

For the most part, states are heading in the right direction taking steps to ensure they are in compliance with the updated Act. We encourage everyone to check our weekly legislative update to check out which bills are being reviewed in your states.