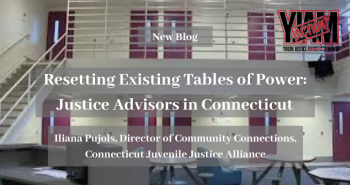 In 2017, I had the honor of becoming a Justice Advisor with the Connecticut Juvenile Justice Alliance. When I started with them, we had no clue what we were doing but we knew something needed to be done. The CTJJA has been a public policy and advocacy organization focused on decriminalizing youth and families for over 15 years. They started working with the Justice Advisors (JAs) in October 2017, when they realized those closest to the problem were closest to the solution. The JAs are a group of individuals who have a wide variety of experiences with Connecticut’s juvenile justice system, ranging from first to second-hand experiences. JAs are compensated for their time and involved in every decision-making process at the CTJJA, whether it’s identifying our priorities or something silly like picking our logo! The Justice Advisors took on the mission of wanting to reset existing tables of power in the current system and recreate those tables into ones that give the directly impacted community equal power in decision making when we’re having conversations about juvenile justice practices, policies and procedures.

As JAs, we facilitated vision sessions throughout the state to bring more than just our voice and opinions to the table, and to help identify root issues throughout the state that are leading our children into the system. The vision sessions were basically authentic conversations led by the JAs, considered credible messengers, in different programs or facilities, with their participants discussing the pros and cons of the current system, areas for improvement both in the system and in the community, their personal experiences and how certain things may have been avoided, and more. Recording and dissecting these vision session notes has helped the team identify 7 common themes leading children into the juvenile justice system, including housing insecurity, economic insecurity, barriers to equal opportunities, lack of hope, abuse of authority and lack of trust in the system, need for role models and credible messengers, and trauma caused within the communities, beginning with the underlying issue, structuralized racism and systemic oppression.

Only a year into this new relationship with the Justice Advisors, the CTJJA staff already realized how critical it is to involve those into these conversations at a state level! Without the relationship they built with the Justice Advisors, their work wouldn’t be the same. The Justice Advisors have completely shifted the direction in which the CTJJA was heading. When having conversations about where young people should be housed based on certain charges, what resources are needed in the community, or even something as simple as how to create a youth-led council in a program or facility, the JAs have been a resource to their community, national networks and local programs, facilities, and agencies.

July 2, 2018, I started my role as a full-time staff member spearheading the Justice Advisor work. This meant the organization taking an even bigger step to make sure there is always a young person there for their own decision making and growing process. Since then, the JAs have expanded with Homebase teams in two cities in Connecticut, while working statewide. The JAs have been a part of several local and state conversations and are working their way to permanent seats at these tables – while the organization overall continues to work to recruit friends and community members to the conversations as well.

All of this simply goes back to the importance of working with the directly impacted community, whether we’re talking about mental health, juvenile justice, homelessness, etc. When we’re having conversations about those who are impacted by the way our juvenile justice system is structured, or the changes that need to be made, we need to have these people at the table and a part of these conversations. Throughout the experience of facilitating vision sessions and working with the CTJJA, we’ve learned that we do not always have the right answer and there might be factors that we aren’t even thinking of or taking into consideration.

If I had never gotten involved in this work, I don’t think I would’ve been on the right track at this point in my life. Being a part of those conversations isn’t only beneficial for the system itself, but for those who fall victim to the system. We need to keep our families and youth authentically involved in these ongoing conversations and changes.