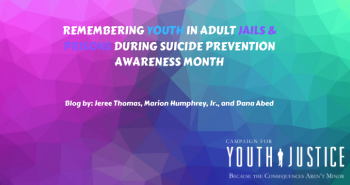 September is Suicide Prevention Awareness Month. During this month, we remember and mourn the over 47,000 Americans who commit suicide each year.  September is an opportunity to elevate important prevention strategies and support loved ones at risk of suicide. This month the Campaign for Youth Justice will elevate one prevention strategy for justice-involved youth which is to remove children under eighteen from adult jails and prisons across the country.

Suicide is a growing public health crisis particularly among adolescents ages 10 through 24 years old. According to the CDC, suicide is the second leading cause of death among this population. The crisis is only magnified for youth who come into contact with the justice system.

While conversations about youth in the juvenile and adult criminal justice system generally center around reducing acts of violence committed by youth, there is rarely a discussion of how the justice system perpetuates violence against youth. 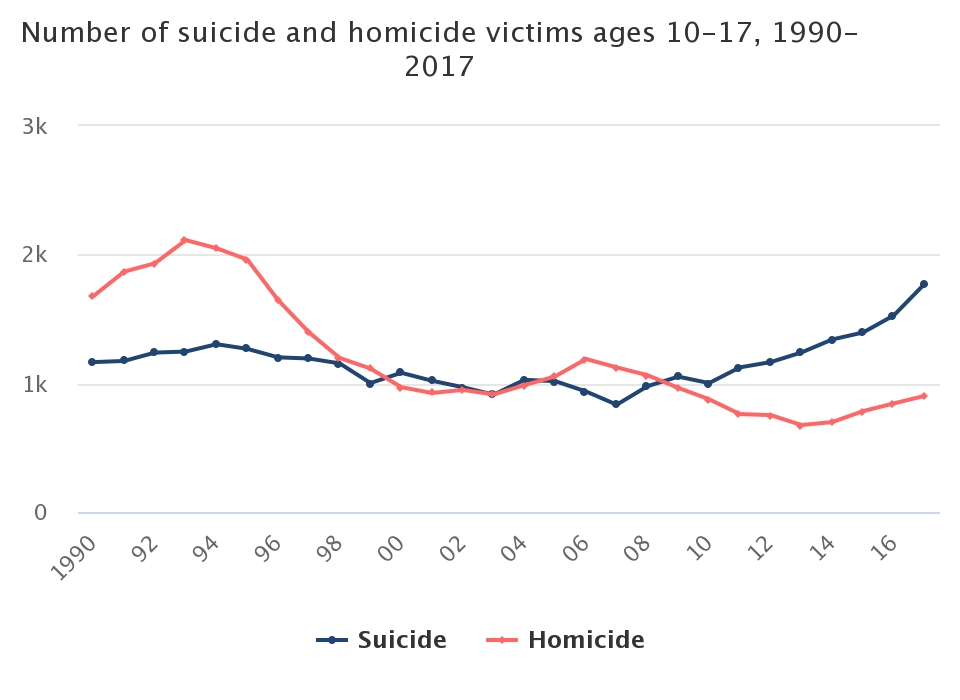 For decades, data has shown that suicides are more common among justice-involved youth than youth in the general population.(Gray et al., 2002; Hayes, 2009). The first published national survey of suicide among incarcerated youth reported that approximately 57 per 100,000 youth detained in the juvenile justice system committed suicide, a rate 4.6 times greater than general population rates (Memory, 1989). More recent research on youth held in adult jails indicates that they are at an even higher risk of suicide than their peers in the juvenile justice system. According to the 2018 report, Getting To Zero, by Neelum Arya, youth in adult facilities are as much as 36 times more likely to commit suicide than their peers in a juvenile facility and 9 times more likely than their peers in the general population. Her report also found that youth in adult facilities were also exposed to physical and sexual violence, solitary confinement, and a deprivation of treatment and services, all experiences that could contribute to a higher risk of suicide.

If state legislators care both about public safety and public health of children in their states, they can pass laws to ensure that no children under eighteen are held in adult jails and prisons.  One out of every ten incarcerated youth in our justice system is held in an adult jail or prison, so there is still significant work for legislators to do on this issue. In 2018, Congress passed the reauthorization of the Juvenile Justice and Delinquency Prevention Act also known as the Juvenile Justice Reform Act of 2018. This legislation requires states to remove youth prosecuted as adults from adult jails pretrial by December 21, 2021 or risk a reduction in their state’s federal funding.  The law includes some exceptions if a judge finds that its in the “interest of justice” to hold a youth in adult jail, but emphasizes that this is a decision that will have to be made on a regular basis to ensure that if a youth can be moved out of an adult jail they will be moved.

This September during Suicide Prevention Awareness Month, the Campaign for Youth Justice calls on legislators to take a first step toward addressing this crisis among justice-involved youth, by keeping children under eighteen out of adult jails and prisons.  To take action on this issue, read CFYJ’s new report on how youth prosecuted as adults are held in your state and then tell your state elected officials to make sure no youth are held in adult facilities.