Felony Murder – An Unjust Law That Needs to Go 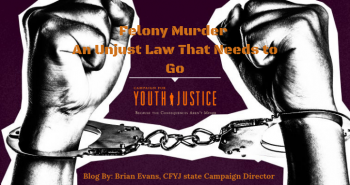 On August 13, in Old Mill Creek, Lake County, Illinois, a 75-year-old homeowner woke up at about 1 am, heard noises, saw some kids around his car, yelled at them to leave, and, when one advanced on him with an object in his hand (allegedly a hunting knife), fired his gun and killed 14-year-old Jaquon Swopes. Murder charges were soon filed, but not against the homeowner. Instead first degree “felony murder” charges were filed against Jaquon’s five companions, all cousins of his between 16 and 18 years of age, who allegedly were attempting to break into the homeowner’s car.

These absurd charges recall the case in Columbus, Ohio, where a police officer (a SWAT agent in fact) named Eric Richards killed Julius Tate, but Julius’ 16-year-old girlfriend Masonique Saunders was the one charged with the crime of “felony murder”. Facing being tried as an adult, she pled guilty to reduced charges that kept her in Ohio’s juvenile justice system.

Or the case of Trevonte Phoenix, an 18-year-old in Florida who faced “felony murder” charges when a 7-year-old girl named Heidy Rivas Villanueva was killed by a bullet fired by Stanley Harris during a gunfight. Phoenix pled to second degree murder and a minimum 20-year prison sentence.

“Felony murder” is a charge in which a person is held responsible for a death that occurred during their commission of a felony, but which they did not directly cause, or in many cases even intend to cause.

“Felony murder” is used against both adults and youth. In almost half the states, it can lead to a death sentence for adults. It is a powerful tool to inflict collective punishment on teenagers, who tend to act in groups. It is fundamentally unjust law – and it should come as no surprise that in the above cases, as in many others, those charged with “felony murder” were Black.

“Felony murder” emerged in British law in the 18th century. It has since been abolished in the United Kingdom and held unconstitutional in Canada, unless there is “proof beyond a reasonable doubt of a subjective foresight of death”.

Now there is legislation – HB 1615 – that will substantially restrict the “felony murder” statute in Illinois. As the trials of the “Lake County Five” are underway, Restore Justice Illinois and local activists in Waukegan are organizing to demand better justice for them, and to rally for the passage of HB 1615. (If you live in Illinois, you can take action here).

Hopefully this means we are beginning to move towards the day when we join the U.K. and Canada in ridding ourselves of the 18th legal concept known as “felony murder”.