Challenging Lengthy Sentences for Youth Prosecuted As Adults in Illinois 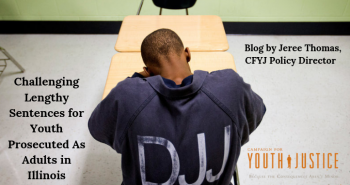 Brian Harrington was fourteen-years-old when he was prosecuted as an adult in Illinois and sentenced to twenty-five year under the state’s truth in sentencing law.  On April 11th, his attorney and loved ones presented his clemency petition in the hopes of bringing him home before he spends over half of his life incarcerated.

Unfortunately, Brian is one of many individuals in Illinois spending decades in prison for offenses committed while under the age of eighteen.  As a result, advocates, attorneys, and directly impacted individuals and families have pushed to challenge lengthy sentences for youth with some success this month.

On April 1, Governor Pritzker signed HB 531 which provides for parole eligibility after ten years for individuals who committed non-homicide offenses while under the age of twenty one. Those individuals who have been convicted of murder, aggravated sexual assault or predatory sexual assault are eligible for parole after serving twenty years or more, unless the individual has a natural life sentence.  The law goes into effect on June 1, 2019 and applies to those who are sentenced on or after the effective date.

Unfortunately, Illinois has not passed legislation to ban juvenile life without parole and as a result, the Illinois Supreme Court has taken up the question of what constitutes a life sentence.   On April 18th, the Illinois Supreme Court decided People v. Buffer  and held that Buffer’s fifty-year sentence imposed for an offense he committed at age sixteen was unconstitutional.

The Court based its decision on 2016 legislation which states that youth sentenced to natural life should serve a mandatory forty year sentence.  The Court writes:

We generally defer to the legislature in the sentencing arena because the legislature, institutionally, is better equipped to gauge the seriousness of various - offenses and to fashion sentences accordingly.  -People v. Buffer (2019)

As a result, the Court holds that:

In determining when a juvenile defendant’s prison term is long enough to be considered de facto life without parole, we choose to draw a line at 40 years. - People v. Buffer (2019)

This is another critical example of the importance of leveraging legislative and litigation strategies to challenge lengthy sentences for youth.  While some courts act and encourage the legislature to follow. Other courts look to the legislature to set the bar before moving beyond it.

However, there are some individuals, like Brian Harrington, who will not benefit from the recent movement in the legislature or the courts in Illinois.  Brian is relying on Governor Prtizker to consider his case for clemency. To hear directly from Brian about his case and his experience in the adult system, listen to CFYJ’s recent podcast with him.  To support Brian’s effort for clemency sign his petition here.