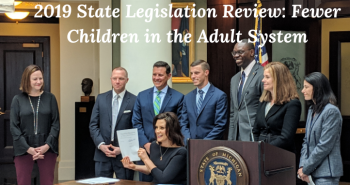 This year, the real-life story of five children wrongfully arrested and convicted in New York, dramatized in the Netflix series “When They See Us”, reminded us why protecting children from the criminal justice system is so important. The film was timely, reflecting and amplifying a point of view that has been increasingly, though not universally, adopted across ideological, geographical, and party lines. In 2019, states continued to push and pass positive legislation keeping children out of the adult criminal justice system.

Michigan became the sixth state in the last four years to pass legislation raising the age of adult court jurisdiction to 18. After implementation (2021) 17-year-olds will no longer be automatically charged as adults regardless of their offense. Now, only Georgia, Texas, and Wisconsin remain as states that treat all 17-year-olds as adults for criminal justice purposes.

Two very different states – Florida and Oregon – ended the automatic transfer of children charged with certain offenses to adult court. While Florida still gives its prosecutors unfettered discretion to charge children as adults, Oregon’s law now only allows for children to be transferred to the adult court by a judge, and even then, children charged or sentenced as adults remain housed in the juvenile system until their 25th birthday, at which time they have an opportunity for resentencing. Vermont gave prosecutors the power to file even the most serious charges in Family Court, potentially reducing the impact of the state’s “12 Deadly” automatic transfer statute.

With the passage of the Juvenile Justice Reform Act (JJRA), which reauthorized the Juvenile Justice and Delinquency Prevention Act (JJDPA), at the end of 2018, states now face a December 2021 deadline to ensure that children charged, but not yet convicted, as adults are not jailed in adult facilities. Many states have already adopted this good practice, and many more will hopefully do so over the next couple of years, but two states – North Carolina and North Dakota – did it this year.

Two states – Maryland and Nevada – authorized studies of their juvenile justice systems. Maryland, whose transfer to adult court numbers are among the worst in the country, created a much-needed Juvenile Justice Reform Council (JJRC) to take a comprehensive look at their system during the next year. Nevada created a Legislative Committee on Child Welfare and Juvenile Justice to look at the state’s detention and sentencing practices for children.

The trend remains clear, despite occasional spasms of often fact-free rhetoric about the dangers of juvenile crime – states are continuing to chip away at misguided, counter-productive, and harmful policies that send children into the adult system.